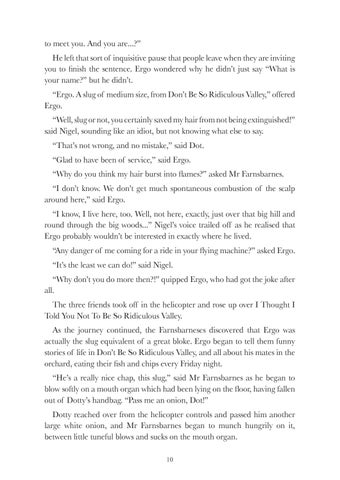 to meet you. And you are...?” He left that sort of inquisitive pause that people leave when they are inviting you to finish the sentence. Ergo wondered why he didn’t just say “What is your name?” but he didn’t. “Ergo. A slug of medium size, from Don’t Be So Ridiculous Valley,” offered Ergo. “Well, slug or not, you certainly saved my hair from not being extinguished!” said Nigel, sounding like an idiot, but not knowing what else to say. “That’s not wrong, and no mistake,” said Dot. “Glad to have been of service,” said Ergo. “Why do you think my hair burst into flames?” asked Mr Farnsbarnes. “I don’t know. We don’t get much spontaneous combustion of the scalp around here,” said Ergo. “I know, I live here, too. Well, not here, exactly, just over that big hill and round through the big woods...” Nigel’s voice trailed off as he realised that Ergo probably wouldn’t be interested in exactly where he lived. “Any danger of me coming for a ride in your flying machine?” asked Ergo. “It’s the least we can do!” said Nigel. “Why don’t you do more then?!” quipped Ergo, who had got the joke after all. The three friends took off in the helicopter and rose up over I Thought I Told You Not To Be So Ridiculous Valley. As the journey continued, the Farnsbarneses discovered that Ergo was actually the slug equivalent of a great bloke. Ergo began to tell them funny stories of life in Don’t Be So Ridiculous Valley, and all about his mates in the orchard, eating their fish and chips every Friday night. “He’s a really nice chap, this slug,” said Mr Farnsbarnes as he began to blow softly on a mouth organ which had been lying on the floor, having fallen out of Dotty’s handbag. “Pass me an onion, Dot!” Dotty reached over from the helicopter controls and passed him another large white onion, and Mr Farnsbarnes began to munch hungrily on it, between little tuneful blows and sucks on the mouth organ. 10