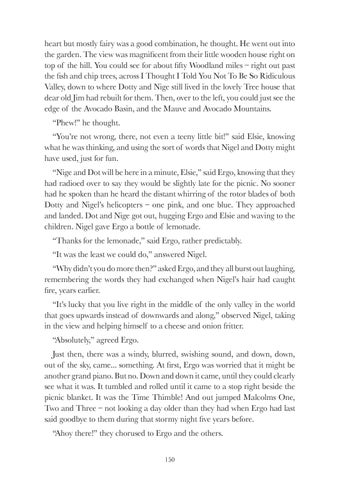 heart but mostly fairy was a good combination, he thought. He went out into the garden. The view was magnificent from their little wooden house right on top of the hill. You could see for about fifty Woodland miles – right out past the fish and chip trees, across I Thought I Told You Not To Be So Ridiculous Valley, down to where Dotty and Nige still lived in the lovely Tree house that dear old Jim had rebuilt for them. Then, over to the left, you could just see the edge of the Avocado Basin, and the Mauve and Avocado Mountains. “Phew!” he thought. “You’re not wrong, there, not even a teeny little bit!” said Elsie, knowing what he was thinking, and using the sort of words that Nigel and Dotty might have used, just for fun. “Nige and Dot will be here in a minute, Elsie,” said Ergo, knowing that they had radioed over to say they would be slightly late for the picnic. No sooner had he spoken than he heard the distant whirring of the rotor blades of both Dotty and Nigel’s helicopters – one pink, and one blue. They approached and landed. Dot and Nige got out, hugging Ergo and Elsie and waving to the children. Nigel gave Ergo a bottle of lemonade. “Thanks for the lemonade,” said Ergo, rather predictably. “It was the least we could do,” answered Nigel. “Why didn’t you do more then?” asked Ergo, and they all burst out laughing, remembering the words they had exchanged when Nigel’s hair had caught fire, years earlier. “It’s lucky that you live right in the middle of the only valley in the world that goes upwards instead of downwards and along,” observed Nigel, taking in the view and helping himself to a cheese and onion fritter. “Absolutely,” agreed Ergo. Just then, there was a windy, blurred, swishing sound, and down, down, out of the sky, came... something. At first, Ergo was worried that it might be another grand piano. But no. Down and down it came, until they could clearly see what it was. It tumbled and rolled until it came to a stop right beside the picnic blanket. It was the Time Thimble! And out jumped Malcolms One, Two and Three – not looking a day older than they had when Ergo had last said goodbye to them during that stormy night five years before. “Ahoy there!” they chorused to Ergo and the others. 150