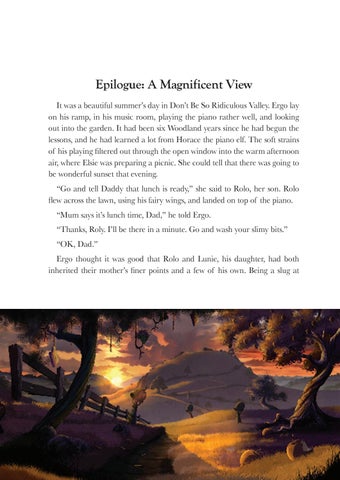 Epilogue: A Magnificent View It was a beautiful summer’s day in Don’t Be So Ridiculous Valley. Ergo lay on his ramp, in his music room, playing the piano rather well, and looking out into the garden. It had been six Woodland years since he had begun the lessons, and he had learned a lot from Horace the piano elf. The soft strains of his playing filtered out through the open window into the warm afternoon air, where Elsie was preparing a picnic. She could tell that there was going to be wonderful sunset that evening. “Go and tell Daddy that lunch is ready,” she said to Rolo, her son. Rolo flew across the lawn, using his fairy wings, and landed on top of the piano. “Mum says it’s lunch time, Dad,” he told Ergo. “Thanks, Roly. I’ll be there in a minute. Go and wash your slimy bits.” “OK, Dad.” Ergo thought it was good that Rolo and Lunie, his daughter, had both inherited their mother’s finer points and a few of his own. Being a slug at