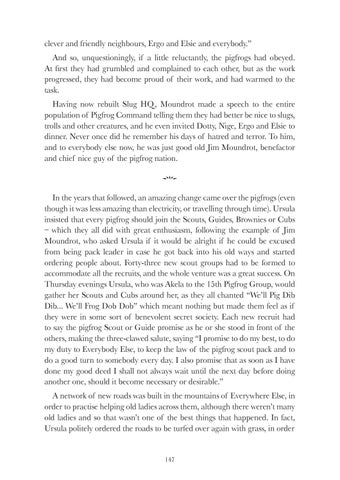 clever and friendly neighbours, Ergo and Elsie and everybody.” And so, unquestioningly, if a little reluctantly, the pigfrogs had obeyed. At first they had grumbled and complained to each other, but as the work progressed, they had become proud of their work, and had warmed to the task. Having now rebuilt Slug HQ , Moundrot made a speech to the entire population of Pigfrog Command telling them they had better be nice to slugs, trolls and other creatures, and he even invited Dotty, Nige, Ergo and Elsie to dinner. Never once did he remember his days of hatred and terror. To him, and to everybody else now, he was just good old Jim Moundrot, benefactor and chief nice guy of the pigfrog nation. 5 In the years that followed, an amazing change came over the pigfrogs (even though it was less amazing than electricity, or travelling through time). Ursula insisted that every pigfrog should join the Scouts, Guides, Brownies or Cubs – which they all did with great enthusiasm, following the example of Jim Moundrot, who asked Ursula if it would be alright if he could be excused from being pack leader in case he got back into his old ways and started ordering people about. Forty-three new scout groups had to be formed to accommodate all the recruits, and the whole venture was a great success. On Thursday evenings Ursula, who was Akela to the 15th Pigfrog Group, would gather her Scouts and Cubs around her, as they all chanted “We’ll Pig Dib Dib... We’ll Frog Dob Dob” which meant nothing but made them feel as if they were in some sort of benevolent secret society. Each new recruit had to say the pigfrog Scout or Guide promise as he or she stood in front of the others, making the three-clawed salute, saying “I promise to do my best, to do my duty to Everybody Else, to keep the law of the pigfrog scout pack and to do a good turn to somebody every day. I also promise that as soon as I have done my good deed I shall not always wait until the next day before doing another one, should it become necessary or desirable.” A network of new roads was built in the mountains of Everywhere Else, in order to practise helping old ladies across them, although there weren’t many old ladies and so that wasn’t one of the best things that happened. In fact, Ursula politely ordered the roads to be turfed over again with grass, in order