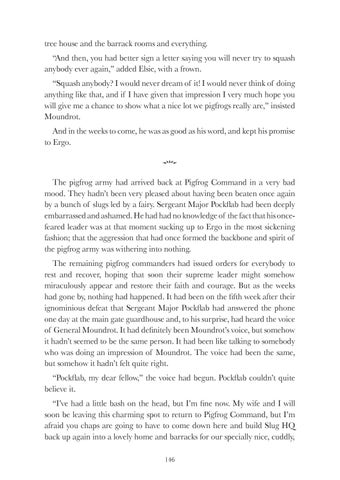 tree house and the barrack rooms and everything. “And then, you had better sign a letter saying you will never try to squash anybody ever again,” added Elsie, with a frown. “Squash anybody? I would never dream of it! I would never think of doing anything like that, and if I have given that impression I very much hope you will give me a chance to show what a nice lot we pigfrogs really are,” insisted Moundrot. And in the weeks to come, he was as good as his word, and kept his promise to Ergo. 5 The pigfrog army had arrived back at Pigfrog Command in a very bad mood. They hadn’t been very pleased about having been beaten once again by a bunch of slugs led by a fairy. Sergeant Major Pockflab had been deeply embarrassed and ashamed. He had had no knowledge of the fact that his oncefeared leader was at that moment sucking up to Ergo in the most sickening fashion; that the aggression that had once formed the backbone and spirit of the pigfrog army was withering into nothing. The remaining pigfrog commanders had issued orders for everybody to rest and recover, hoping that soon their supreme leader might somehow miraculously appear and restore their faith and courage. But as the weeks had gone by, nothing had happened. It had been on the fifth week after their ignominious defeat that Sergeant Major Pockflab had answered the phone one day at the main gate guardhouse and, to his surprise, had heard the voice of General Moundrot. It had definitely been Moundrot’s voice, but somehow it hadn’t seemed to be the same person. It had been like talking to somebody who was doing an impression of Moundrot. The voice had been the same, but somehow it hadn’t felt quite right. “Pockflab, my dear fellow,” the voice had begun. Pockflab couldn’t quite believe it. “I’ve had a little bash on the head, but I’m fine now. My wife and I will soon be leaving this charming spot to return to Pigfrog Command, but I’m afraid you chaps are going to have to come down here and build Slug HQ back up again into a lovely home and barracks for our specially nice, cuddly, 146