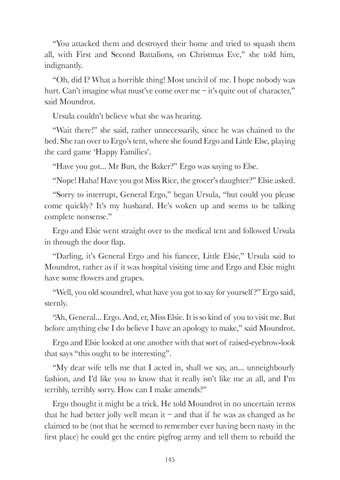 “You attacked them and destroyed their home and tried to squash them all, with First and Second Battalions, on Christmas Eve,” she told him, indignantly. “Oh, did I? What a horrible thing! Most uncivil of me. I hope nobody was hurt. Can’t imagine what must’ve come over me – it’s quite out of character,” said Moundrot. Ursula couldn’t believe what she was hearing. “Wait there!” she said, rather unnecessarily, since he was chained to the bed. She ran over to Ergo’s tent, where she found Ergo and Little Else, playing the card game ‘Happy Families’. “Have you got... Mr Bun, the Baker?” Ergo was saying to Else. “Nope! Haha! Have you got Miss Rice, the grocer’s daughter?” Elsie asked. “Sorry to interrupt, General Ergo,” began Ursula, “but could you please come quickly? It’s my husband. He’s woken up and seems to be talking complete nonsense.” Ergo and Elsie went straight over to the medical tent and followed Ursula in through the door flap. “Darling, it’s General Ergo and his fiancee, Little Elsie,” Ursula said to Moundrot, rather as if it was hospital visiting time and Ergo and Elsie might have some flowers and grapes. “Well, you old scoundrel, what have you got to say for yourself ?” Ergo said, sternly. “Ah, General... Ergo. And, er, Miss Elsie. It is so kind of you to visit me. But before anything else I do believe I have an apology to make,” said Moundrot. Ergo and Elsie looked at one another with that sort of raised-eyebrow-look that says “this ought to be interesting”. “My dear wife tells me that I acted in, shall we say, an... unneighbourly fashion, and I’d like you to know that it really isn’t like me at all, and I’m terribly, terribly sorry. How can I make amends?” Ergo thought it might be a trick. He told Moundrot in no uncertain terms that he had better jolly well mean it – and that if he was as changed as he claimed to be (not that he seemed to remember ever having been nasty in the first place) he could get the entire pigfrog army and tell them to rebuild the 145