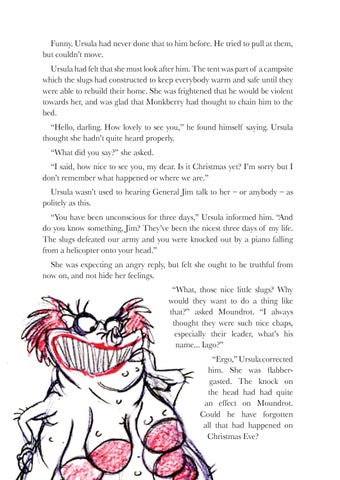 Funny. Ursula had never done that to him before. He tried to pull at them, but couldn’t move. Ursula had felt that she must look after him. The tent was part of a campsite which the slugs had constructed to keep everybody warm and safe until they were able to rebuild their home. She was frightened that he would be violent towards her, and was glad that Monkberry had thought to chain him to the bed. “Hello, darling. How lovely to see you,” he found himself saying. Ursula thought she hadn’t quite heard properly. “What did you say?” she asked. “I said, how nice to see you, my dear. Is it Christmas yet? I’m sorry but I don’t remember what happened or where we are.” Ursula wasn’t used to hearing General Jim talk to her – or anybody – as politely as this. “You have been unconscious for three days,” Ursula informed him. “And do you know something, Jim? They’ve been the nicest three days of my life. The slugs defeated our army and you were knocked out by a piano falling from a helicopter onto your head.” She was expecting an angry reply, but felt she ought to be truthful from now on, and not hide her feelings. “What, those nice little slugs? Why would they want to do a thing like that?” asked Moundrot. “I always thought they were such nice chaps, especially their leader, what’s his name... Iago?” “Ergo,” Ursula corrected him. She was flabbergasted. The knock on the head had had quite an effect on Moundrot. Could he have forgotten all that had happened on Christmas Eve? 144