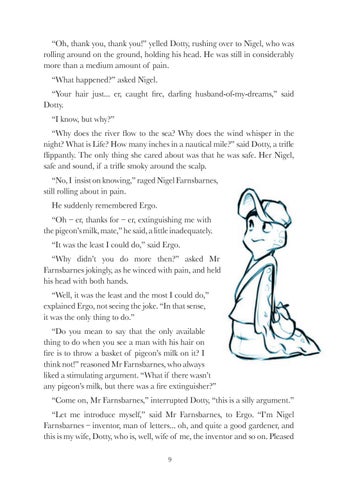 “Oh, thank you, thank you!” yelled Dotty, rushing over to Nigel, who was rolling around on the ground, holding his head. He was still in considerably more than a medium amount of pain. “What happened?” asked Nigel. “Your hair just... er, caught fire, darling husband-of-my-dreams,” said Dotty. “I know, but why?” “Why does the river flow to the sea? Why does the wind whisper in the night? What is Life? How many inches in a nautical mile?” said Dotty, a trifle flippantly. The only thing she cared about was that he was safe. Her Nigel, safe and sound, if a trifle smoky around the scalp. “No, I insist on knowing,” raged Nigel Farnsbarnes, still rolling about in pain. He suddenly remembered Ergo. “Oh – er, thanks for – er, extinguishing me with the pigeon’s milk, mate,” he said, a little inadequately. “It was the least I could do,” said Ergo. “Why didn’t you do more then?” asked Mr Farnsbarnes jokingly, as he winced with pain, and held his head with both hands. “Well, it was the least and the most I could do,” explained Ergo, not seeing the joke. “In that sense, it was the only thing to do.” “Do you mean to say that the only available thing to do when you see a man with his hair on fire is to throw a basket of pigeon’s milk on it? I think not!” reasoned Mr Farnsbarnes, who always liked a stimulating argument. “What if there wasn’t any pigeon’s milk, but there was a fire extinguisher?” “Come on, Mr Farnsbarnes,” interrupted Dotty, “this is a silly argument.” “Let me introduce myself,” said Mr Farnsbarnes, to Ergo. “I’m Nigel Farnsbarnes – inventor, man of letters... oh, and quite a good gardener, and this is my wife, Dotty, who is, well, wife of me, the inventor and so on. Pleased 9