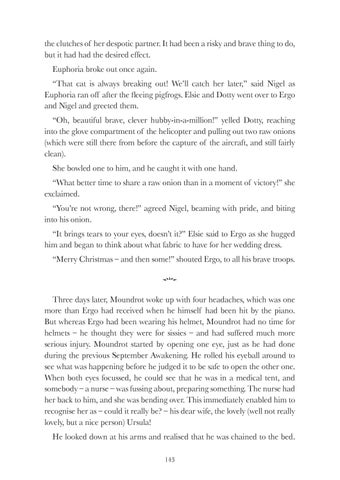 the clutches of her despotic partner. It had been a risky and brave thing to do, but it had had the desired effect. Euphoria broke out once again. “That cat is always breaking out! We’ll catch her later,” said Nigel as Euphoria ran off after the fleeing pigfrogs. Elsie and Dotty went over to Ergo and Nigel and greeted them. “Oh, beautiful brave, clever hubby-in-a-million!” yelled Dotty, reaching into the glove compartment of the helicopter and pulling out two raw onions (which were still there from before the capture of the aircraft, and still fairly clean). She bowled one to him, and he caught it with one hand. “What better time to share a raw onion than in a moment of victory!” she exclaimed. “You’re not wrong, there!” agreed Nigel, beaming with pride, and biting into his onion. “It brings tears to your eyes, doesn’t it?” Elsie said to Ergo as she hugged him and began to think about what fabric to have for her wedding dress. “Merry Christmas – and then some!” shouted Ergo, to all his brave troops. 5 Three days later, Moundrot woke up with four headaches, which was one more than Ergo had received when he himself had been hit by the piano. But whereas Ergo had been wearing his helmet, Moundrot had no time for helmets – he thought they were for sissies – and had suffered much more serious injury. Moundrot started by opening one eye, just as he had done during the previous September Awakening. He rolled his eyeball around to see what was happening before he judged it to be safe to open the other one. When both eyes focussed, he could see that he was in a medical tent, and somebody – a nurse – was fussing about, preparing something. The nurse had her back to him, and she was bending over. This immediately enabled him to recognise her as – could it really be? – his dear wife, the lovely (well not really lovely, but a nice person) Ursula! He looked down at his arms and realised that he was chained to the bed. 143