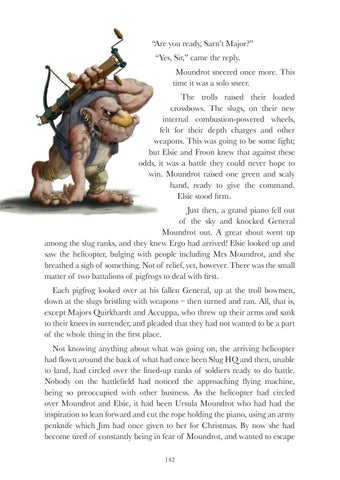 “Are you ready, Sarn’t Major?” “Yes, Sir,” came the reply. Moundrot sneered once more. This time it was a solo sneer. The trolls raised their loaded crossbows. The slugs, on their new internal combustion-powered wheels, felt for their depth charges and other weapons. This was going to be some fight; but Elsie and Froon knew that against these odds, it was a battle they could never hope to win. Moundrot raised one green and scaly hand, ready to give the command. Elsie stood firm. Just then, a grand piano fell out of the sky and knocked General Moundrot out. A great shout went up among the slug ranks, and they knew Ergo had arrived! Elsie looked up and saw the helicopter, bulging with people including Mrs Moundrot, and she breathed a sigh of something. Not of relief, yet, however. There was the small matter of two battalions of pigfrogs to deal with first. Each pigfrog looked over at his fallen General, up at the troll bowmen, down at the slugs bristling with weapons – then turned and ran. All, that is, except Majors Quirkhardt and Accuppa, who threw up their arms and sank to their knees in surrender, and pleaded that they had not wanted to be a part of the whole thing in the first place. Not knowing anything about what was going on, the arriving helicopter had flown around the back of what had once been Slug HQ and then, unable to land, had circled over the lined-up ranks of soldiers ready to do battle. Nobody on the battlefield had noticed the approaching flying machine, being so preoccupied with other business. As the helicopter had circled over Moundrot and Elsie, it had been Ursula Moundrot who had had the inspiration to lean forward and cut the rope holding the piano, using an army penknife which Jim had once given to her for Christmas. By now she had become tired of constantly being in fear of Moundrot, and wanted to escape 142