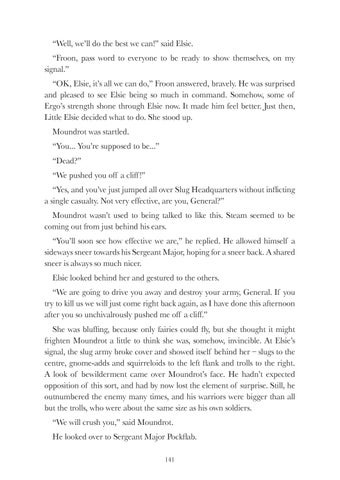 “Well, we’ll do the best we can!” said Elsie. “Froon, pass word to everyone to be ready to show themselves, on my signal.” “OK, Elsie, it’s all we can do,” Froon answered, bravely. He was surprised and pleased to see Elsie being so much in command. Somehow, some of Ergo’s strength shone through Elsie now. It made him feel better. Just then, Little Elsie decided what to do. She stood up. Moundrot was startled. “You... You’re supposed to be...” “Dead?” “We pushed you off a cliff !” “Yes, and you’ve just jumped all over Slug Headquarters without inflicting a single casualty. Not very effective, are you, General?” Moundrot wasn’t used to being talked to like this. Steam seemed to be coming out from just behind his ears. “You’ll soon see how effective we are,” he replied. He allowed himself a sideways sneer towards his Sergeant Major, hoping for a sneer back. A shared sneer is always so much nicer. Elsie looked behind her and gestured to the others. “We are going to drive you away and destroy your army, General. If you try to kill us we will just come right back again, as I have done this afternoon after you so unchivalrously pushed me off a cliff.” She was bluffing, because only fairies could fly, but she thought it might frighten Moundrot a little to think she was, somehow, invincible. At Elsie’s signal, the slug army broke cover and showed itself behind her – slugs to the centre, gnome-adds and squirreloids to the left flank and trolls to the right. A look of bewilderment came over Moundrot’s face. He hadn’t expected opposition of this sort, and had by now lost the element of surprise. Still, he outnumbered the enemy many times, and his warriors were bigger than all but the trolls, who were about the same size as his own soldiers. “We will crush you,” said Moundrot. He looked over to Sergeant Major Pockflab. 141