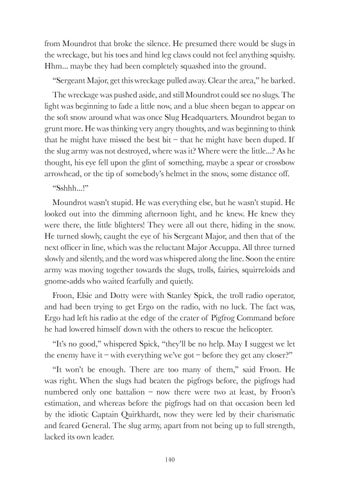 from Moundrot that broke the silence. He presumed there would be slugs in the wreckage, but his toes and hind leg claws could not feel anything squishy. Hhm... maybe they had been completely squashed into the ground. “Sergeant Major, get this wreckage pulled away. Clear the area,” he barked. The wreckage was pushed aside, and still Moundrot could see no slugs. The light was beginning to fade a little now, and a blue sheen began to appear on the soft snow around what was once Slug Headquarters. Moundrot began to grunt more. He was thinking very angry thoughts, and was beginning to think that he might have missed the best bit – that he might have been duped. If the slug army was not destroyed, where was it? Where were the little...? As he thought, his eye fell upon the glint of something, maybe a spear or crossbow arrowhead, or the tip of somebody’s helmet in the snow, some distance off. “Sshhh...!” Moundrot wasn’t stupid. He was everything else, but he wasn’t stupid. He looked out into the dimming afternoon light, and he knew. He knew they were there, the little blighters! They were all out there, hiding in the snow. He turned slowly, caught the eye of his Sergeant Major, and then that of the next officer in line, which was the reluctant Major Accuppa. All three turned slowly and silently, and the word was whispered along the line. Soon the entire army was moving together towards the slugs, trolls, fairies, squirreloids and gnome-adds who waited fearfully and quietly. Froon, Elsie and Dotty were with Stanley Spick, the troll radio operator, and had been trying to get Ergo on the radio, with no luck. The fact was, Ergo had left his radio at the edge of the crater of Pigfrog Command before he had lowered himself down with the others to rescue the helicopter. “It’s no good,” whispered Spick, “they’ll be no help. May I suggest we let the enemy have it – with everything we’ve got – before they get any closer?” “It won’t be enough. There are too many of them,” said Froon. He was right. When the slugs had beaten the pigfrogs before, the pigfrogs had numbered only one battalion – now there were two at least, by Froon’s estimation, and whereas before the pigfrogs had on that occasion been led by the idiotic Captain Quirkhardt, now they were led by their charismatic and feared General. The slug army, apart from not being up to full strength, lacked its own leader. 140