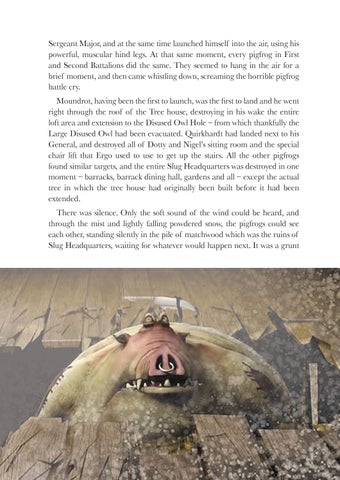 Sergeant Major, and at the same time launched himself into the air, using his powerful, muscular hind legs. At that same moment, every pigfrog in First and Second Battalions did the same. They seemed to hang in the air for a brief moment, and then came whistling down, screaming the horrible pigfrog battle cry. Moundrot, having been the first to launch, was the first to land and he went right through the roof of the Tree house, destroying in his wake the entire loft area and extension to the Disused Owl Hole – from which thankfully the Large Disused Owl had been evacuated. Quirkhardt had landed next to his General, and destroyed all of Dotty and Nigel’s sitting room and the special chair lift that Ergo used to use to get up the stairs. All the other pigfrogs found similar targets, and the entire Slug Headquarters was destroyed in one moment – barracks, barrack dining hall, gardens and all – except the actual tree in which the tree house had originally been built before it had been extended. There was silence. Only the soft sound of the wind could be heard, and through the mist and lightly falling powdered snow, the pigfrogs could see each other, standing silently in the pile of matchwood which was the ruins of Slug Headquarters, waiting for whatever would happen next. It was a grunt