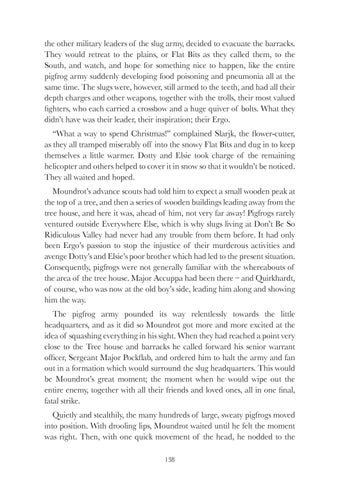 the other military leaders of the slug army, decided to evacuate the barracks. They would retreat to the plains, or Flat Bits as they called them, to the South, and watch, and hope for something nice to happen, like the entire pigfrog army suddenly developing food poisoning and pneumonia all at the same time. The slugs were, however, still armed to the teeth, and had all their depth charges and other weapons, together with the trolls, their most valued fighters, who each carried a crossbow and a huge quiver of bolts. What they didn’t have was their leader, their inspiration; their Ergo. “What a way to spend Christmas!” complained Slarjk, the flower-cutter, as they all tramped miserably off into the snowy Flat Bits and dug in to keep themselves a little warmer. Dotty and Elsie took charge of the remaining helicopter and others helped to cover it in snow so that it wouldn’t be noticed. They all waited and hoped. Moundrot’s advance scouts had told him to expect a small wooden peak at the top of a tree, and then a series of wooden buildings leading away from the tree house, and here it was, ahead of him, not very far away! Pigfrogs rarely ventured outside Everywhere Else, which is why slugs living at Don’t Be So Ridiculous Valley had never had any trouble from them before. It had only been Ergo’s passion to stop the injustice of their murderous activities and avenge Dotty’s and Elsie’s poor brother which had led to the present situation. Consequently, pigfrogs were not generally familiar with the whereabouts of the area of the tree house. Major Accuppa had been there – and Quirkhardt, of course, who was now at the old boy’s side, leading him along and showing him the way. The pigfrog army pounded its way relentlessly towards the little headquarters, and as it did so Moundrot got more and more excited at the idea of squashing everything in his sight. When they had reached a point very close to the Tree house and barracks he called forward his senior warrant officer, Sergeant Major Pockflab, and ordered him to halt the army and fan out in a formation which would surround the slug headquarters. This would be Moundrot’s great moment; the moment when he would wipe out the entire enemy, together with all their friends and loved ones, all in one final, fatal strike. Quietly and stealthily, the many hundreds of large, sweaty pigfrogs moved into position. With drooling lips, Moundrot waited until he felt the moment was right. Then, with one quick movement of the head, he nodded to the 138