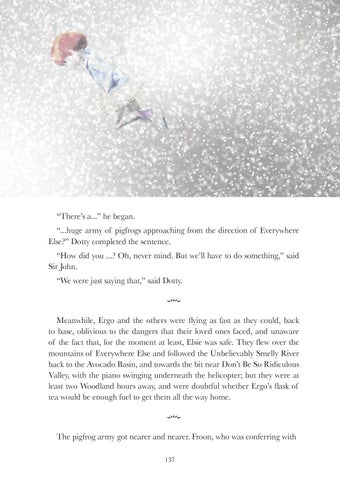 “There’s a...” he began. “...huge army of pigfrogs approaching from the direction of Everywhere Else?” Dotty completed the sentence. “How did you ...? Oh, never mind. But we’ll have to do something,” said Sir John. “We were just saying that,” said Dotty. 5 Meanwhile, Ergo and the others were flying as fast as they could, back to base, oblivious to the dangers that their loved ones faced, and unaware of the fact that, for the moment at least, Elsie was safe. They flew over the mountains of Everywhere Else and followed the Unbelievably Smelly River back to the Avocado Basin, and towards the bit near Don’t Be So Ridiculous Valley, with the piano swinging underneath the helicopter; but they were at least two Woodland hours away, and were doubtful whether Ergo’s flask of tea would be enough fuel to get them all the way home. 5 The pigfrog army got nearer and nearer. Froon, who was conferring with 137