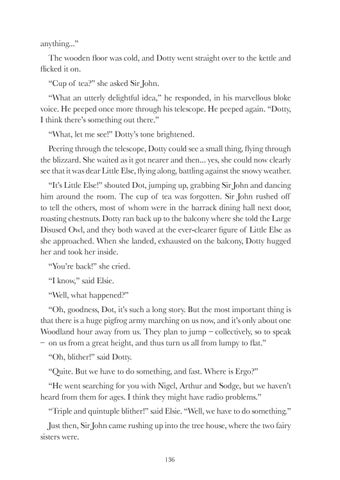 anything...” The wooden floor was cold, and Dotty went straight over to the kettle and flicked it on. “Cup of tea?” she asked Sir John. “What an utterly delightful idea,” he responded, in his marvellous bloke voice. He peeped once more through his telescope. He peeped again. “Dotty, I think there’s something out there.” “What, let me see!” Dotty’s tone brightened. Peering through the telescope, Dotty could see a small thing, flying through the blizzard. She waited as it got nearer and then... yes, she could now clearly see that it was dear Little Else, flying along, battling against the snowy weather. “It’s Little Else!” shouted Dot, jumping up, grabbing Sir John and dancing him around the room. The cup of tea was forgotten. Sir John rushed off to tell the others, most of whom were in the barrack dining hall next door, roasting chestnuts. Dotty ran back up to the balcony where she told the Large Disused Owl, and they both waved at the ever-clearer figure of Little Else as she approached. When she landed, exhausted on the balcony, Dotty hugged her and took her inside. “You’re back!” she cried. “I know,” said Elsie. “Well, what happened?” “Oh, goodness, Dot, it’s such a long story. But the most important thing is that there is a huge pigfrog army marching on us now, and it’s only about one Woodland hour away from us. They plan to jump – collectively, so to speak – on us from a great height, and thus turn us all from lumpy to flat.” “Oh, blither!” said Dotty. “Quite. But we have to do something, and fast. Where is Ergo?” “He went searching for you with Nigel, Arthur and Sodge, but we haven’t heard from them for ages. I think they might have radio problems.” “Triple and quintuple blither!” said Elsie. “Well, we have to do something.” Just then, Sir John came rushing up into the tree house, where the two fairy sisters were. 136