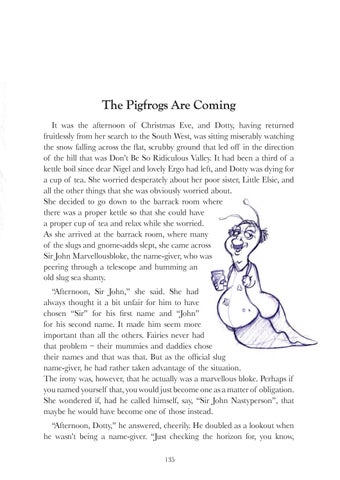 The Pigfrogs Are Coming It was the afternoon of Christmas Eve, and Dotty, having returned fruitlessly from her search to the South West, was sitting miserably watching the snow falling across the flat, scrubby ground that led off in the direction of the hill that was Don’t Be So Ridiculous Valley. It had been a third of a kettle boil since dear Nigel and lovely Ergo had left, and Dotty was dying for a cup of tea. She worried desperately about her poor sister, Little Elsie, and all the other things that she was obviously worried about. She decided to go down to the barrack room where there was a proper kettle so that she could have a proper cup of tea and relax while she worried. As she arrived at the barrack room, where many of the slugs and gnome-adds slept, she came across Sir John Marvellousbloke, the name-giver, who was peering through a telescope and humming an old slug sea shanty. “Afternoon, Sir John,” she said. She had always thought it a bit unfair for him to have chosen “Sir” for his first name and “John” for his second name. It made him seem more important than all the others. Fairies never had that problem – their mummies and daddies chose their names and that was that. But as the official slug name-giver, he had rather taken advantage of the situation. The irony was, however, that he actually was a marvellous bloke. Perhaps if you named yourself that, you would just become one as a matter of obligation. She wondered if, had he called himself, say, “Sir John Nastyperson”, that maybe he would have become one of those instead. “Afternoon, Dotty,” he answered, cheerily. He doubled as a lookout when he wasn’t being a name-giver. “Just checking the horizon for, you know, 135