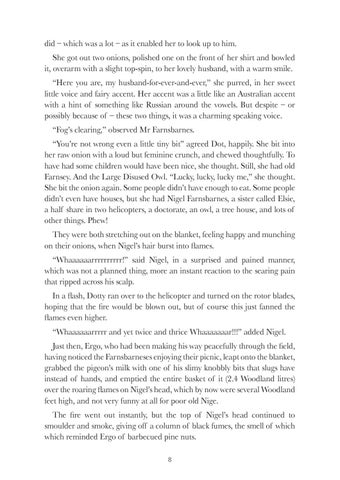 did – which was a lot – as it enabled her to look up to him. She got out two onions, polished one on the front of her shirt and bowled it, overarm with a slight top-spin, to her lovely husband, with a warm smile. “Here you are, my husband-for-ever-and-ever,” she purred, in her sweet little voice and fairy accent. Her accent was a little like an Australian accent with a hint of something like Russian around the vowels. But despite – or possibly because of – these two things, it was a charming speaking voice. “Fog’s clearing,” observed Mr Farnsbarnes. “You’re not wrong even a little tiny bit” agreed Dot, happily. She bit into her raw onion with a loud but feminine crunch, and chewed thoughtfully. To have had some children would have been nice, she thought. Still, she had old Farnsey. And the Large Disused Owl. “Lucky, lucky, lucky me,” she thought. She bit the onion again. Some people didn’t have enough to eat. Some people didn’t even have houses, but she had Nigel Farnsbarnes, a sister called Elsie, a half share in two helicopters, a doctorate, an owl, a tree house, and lots of other things. Phew! They were both stretching out on the blanket, feeling happy and munching on their onions, when Nigel’s hair burst into flames. “Whaaaaaarrrrrrrrrr!” said Nigel, in a surprised and pained manner, which was not a planned thing, more an instant reaction to the searing pain that ripped across his scalp. In a flash, Dotty ran over to the helicopter and turned on the rotor blades, hoping that the fire would be blown out, but of course this just fanned the flames even higher. “Whaaaaaarrrrr and yet twice and thrice Whaaaaaaar!!!” added Nigel. Just then, Ergo, who had been making his way peacefully through the field, having noticed the Farnsbarneses enjoying their picnic, leapt onto the blanket, grabbed the pigeon’s milk with one of his slimy knobbly bits that slugs have instead of hands, and emptied the entire basket of it (2.4 Woodland litres) over the roaring flames on Nigel’s head, which by now were several Woodland feet high, and not very funny at all for poor old Nige. The fire went out instantly, but the top of Nigel’s head continued to smoulder and smoke, giving off a column of black fumes, the smell of which which reminded Ergo of barbecued pine nuts. 8