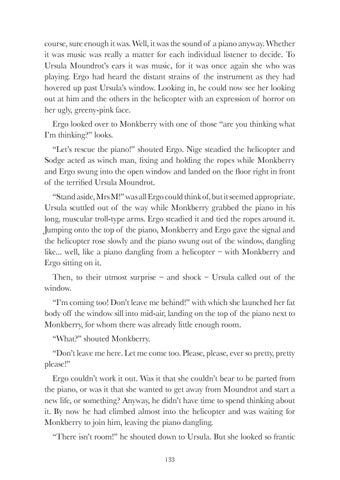 course, sure enough it was. Well, it was the sound of a piano anyway. Whether it was music was really a matter for each individual listener to decide. To Ursula Moundrot’s ears it was music, for it was once again she who was playing. Ergo had heard the distant strains of the instrument as they had hovered up past Ursula’s window. Looking in, he could now see her looking out at him and the others in the helicopter with an expression of horror on her ugly, greeny-pink face. Ergo looked over to Monkberry with one of those “are you thinking what I’m thinking?” looks. “Let’s rescue the piano!” shouted Ergo. Nige steadied the helicopter and Sodge acted as winch man, fixing and holding the ropes while Monkberry and Ergo swung into the open window and landed on the floor right in front of the terrified Ursula Moundrot. “Stand aside, Mrs M!” was all Ergo could think of, but it seemed appropriate. Ursula scuttled out of the way while Monkberry grabbed the piano in his long, muscular troll-type arms. Ergo steadied it and tied the ropes around it. Jumping onto the top of the piano, Monkberry and Ergo gave the signal and the helicopter rose slowly and the piano swung out of the window, dangling like... well, like a piano dangling from a helicopter – with Monkberry and Ergo sitting on it. Then, to their utmost surprise – and shock – Ursula called out of the window. “I’m coming too! Don’t leave me behind!” with which she launched her fat body off the window sill into mid-air, landing on the top of the piano next to Monkberry, for whom there was already little enough room. “What?” shouted Monkberry. “Don’t leave me here. Let me come too. Please, please, ever so pretty, pretty please!” Ergo couldn’t work it out. Was it that she couldn’t bear to be parted from the piano, or was it that she wanted to get away from Moundrot and start a new life, or something? Anyway, he didn’t have time to spend thinking about it. By now he had climbed almost into the helicopter and was waiting for Monkberry to join him, leaving the piano dangling. “There isn’t room!” he shouted down to Ursula. But she looked so frantic 133