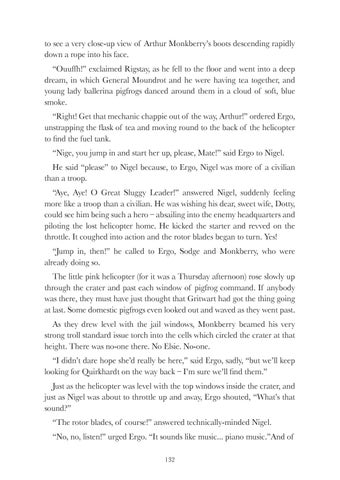 to see a very close-up view of Arthur Monkberry’s boots descending rapidly down a rope into his face. “Ouuffh!” exclaimed Rigstay, as he fell to the floor and went into a deep dream, in which General Moundrot and he were having tea together, and young lady ballerina pigfrogs danced around them in a cloud of soft, blue smoke. “Right! Get that mechanic chappie out of the way, Arthur!” ordered Ergo, unstrapping the flask of tea and moving round to the back of the helicopter to find the fuel tank. “Nige, you jump in and start her up, please, Mate!” said Ergo to Nigel. He said “please” to Nigel because, to Ergo, Nigel was more of a civilian than a troop. “Aye, Aye! O Great Sluggy Leader!” answered Nigel, suddenly feeling more like a troop than a civilian. He was wishing his dear, sweet wife, Dotty, could see him being such a hero – absailing into the enemy headquarters and piloting the lost helicopter home. He kicked the starter and revved on the throttle. It coughed into action and the rotor blades began to turn. Yes! “Jump in, then!” he called to Ergo, Sodge and Monkberry, who were already doing so. The little pink helicopter (for it was a Thursday afternoon) rose slowly up through the crater and past each window of pigfrog command. If anybody was there, they must have just thought that Gritwart had got the thing going at last. Some domestic pigfrogs even looked out and waved as they went past. As they drew level with the jail windows, Monkberry beamed his very strong troll standard issue torch into the cells which circled the crater at that height. There was no-one there. No Elsie. No-one. “I didn’t dare hope she’d really be here,” said Ergo, sadly, “but we’ll keep looking for Quirkhardt on the way back – I’m sure we’ll find them.” Just as the helicopter was level with the top windows inside the crater, and just as Nigel was about to throttle up and away, Ergo shouted, “What’s that sound?” “The rotor blades, of course!” answered technically-minded Nigel. “No, no, listen!” urged Ergo. “It sounds like music... piano music.”And of 132