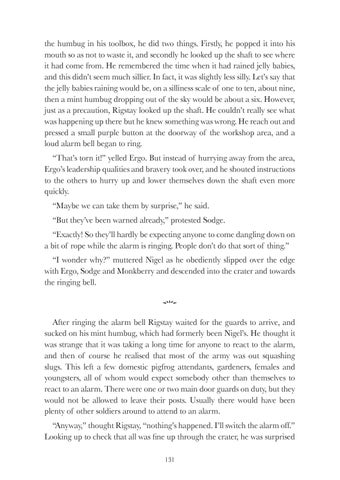 the humbug in his toolbox, he did two things. Firstly, he popped it into his mouth so as not to waste it, and secondly he looked up the shaft to see where it had come from. He remembered the time when it had rained jelly babies, and this didn’t seem much sillier. In fact, it was slightly less silly. Let’s say that the jelly babies raining would be, on a silliness scale of one to ten, about nine, then a mint humbug dropping out of the sky would be about a six. However, just as a precaution, Rigstay looked up the shaft. He couldn’t really see what was happening up there but he knew something was wrong. He reach out and pressed a small purple button at the doorway of the workshop area, and a loud alarm bell began to ring. “That’s torn it!” yelled Ergo. But instead of hurrying away from the area, Ergo’s leadership qualities and bravery took over, and he shouted instructions to the others to hurry up and lower themselves down the shaft even more quickly. “Maybe we can take them by surprise,” he said. “But they’ve been warned already,” protested Sodge. “Exactly! So they’ll hardly be expecting anyone to come dangling down on a bit of rope while the alarm is ringing. People don’t do that sort of thing.” “I wonder why?” muttered Nigel as he obediently slipped over the edge with Ergo, Sodge and Monkberry and descended into the crater and towards the ringing bell. 5 After ringing the alarm bell Rigstay waited for the guards to arrive, and sucked on his mint humbug, which had formerly been Nigel’s. He thought it was strange that it was taking a long time for anyone to react to the alarm, and then of course he realised that most of the army was out squashing slugs. This left a few domestic pigfrog attendants, gardeners, females and youngsters, all of whom would expect somebody other than themselves to react to an alarm. There were one or two main door guards on duty, but they would not be allowed to leave their posts. Usually there would have been plenty of other soldiers around to attend to an alarm. “Anyway,” thought Rigstay, “nothing’s happened. I’ll switch the alarm off.” Looking up to check that all was fine up through the crater, he was surprised 131