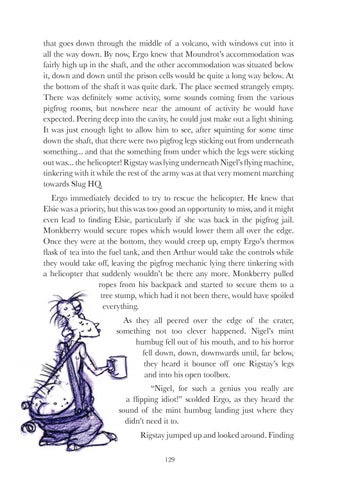 that goes down through the middle of a volcano, with windows cut into it all the way down. By now, Ergo knew that Moundrot’s accommodation was fairly high up in the shaft, and the other accommodation was situated below it, down and down until the prison cells would be quite a long way below. At the bottom of the shaft it was quite dark. The place seemed strangely empty. There was definitely some activity, some sounds coming from the various pigfrog rooms, but nowhere near the amount of activity he would have expected. Peering deep into the cavity, he could just make out a light shining. It was just enough light to allow him to see, after squinting for some time down the shaft, that there were two pigfrog legs sticking out from underneath something... and that the something from under which the legs were sticking out was... the helicopter! Rigstay was lying underneath Nigel’s flying machine, tinkering with it while the rest of the army was at that very moment marching towards Slug HQ. Ergo immediately decided to try to rescue the helicopter. He knew that Elsie was a priority, but this was too good an opportunity to miss, and it might even lead to finding Elsie, particularly if she was back in the pigfrog jail. Monkberry would secure ropes which would lower them all over the edge. Once they were at the bottom, they would creep up, empty Ergo’s thermos flask of tea into the fuel tank, and then Arthur would take the controls while they would take off, leaving the pigfrog mechanic lying there tinkering with a helicopter that suddenly wouldn’t be there any more. Monkberry pulled ropes from his backpack and started to secure them to a tree stump, which had it not been there, would have spoiled everything. As they all peered over the edge of the crater, something not too clever happened. Nigel’s mint humbug fell out of his mouth, and to his horror fell down, down, downwards until, far below, they heard it bounce off one Rigstay’s legs and into his open toolbox. “Nigel, for such a genius you really are a flipping idiot!” scolded Ergo, as they heard the sound of the mint humbug landing just where they didn’t need it to. Rigstay jumped up and looked around. Finding 129