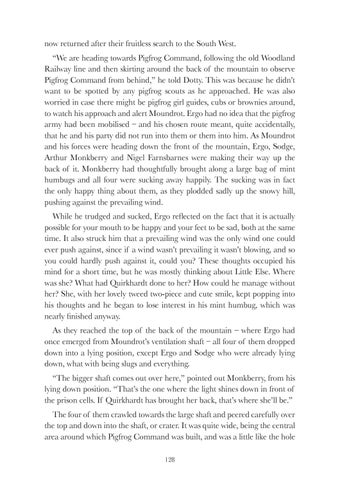 now returned after their fruitless search to the South West. “We are heading towards Pigfrog Command, following the old Woodland Railway line and then skirting around the back of the mountain to observe Pigfrog Command from behind,” he told Dotty. This was because he didn’t want to be spotted by any pigfrog scouts as he approached. He was also worried in case there might be pigfrog girl guides, cubs or brownies around, to watch his approach and alert Moundrot. Ergo had no idea that the pigfrog army had been mobilised – and his chosen route meant, quite accidentally, that he and his party did not run into them or them into him. As Moundrot and his forces were heading down the front of the mountain, Ergo, Sodge, Arthur Monkberry and Nigel Farnsbarnes were making their way up the back of it. Monkberry had thoughtfully brought along a large bag of mint humbugs and all four were sucking away happily. The sucking was in fact the only happy thing about them, as they plodded sadly up the snowy hill, pushing against the prevailing wind. While he trudged and sucked, Ergo reflected on the fact that it is actually possible for your mouth to be happy and your feet to be sad, both at the same time. It also struck him that a prevailing wind was the only wind one could ever push against, since if a wind wasn’t prevailing it wasn’t blowing, and so you could hardly push against it, could you? These thoughts occupied his mind for a short time, but he was mostly thinking about Little Else. Where was she? What had Quirkhardt done to her? How could he manage without her? She, with her lovely tweed two-piece and cute smile, kept popping into his thoughts and he began to lose interest in his mint humbug, which was nearly finished anyway. As they reached the top of the back of the mountain – where Ergo had once emerged from Moundrot’s ventilation shaft – all four of them dropped down into a lying position, except Ergo and Sodge who were already lying down, what with being slugs and everything. “The bigger shaft comes out over here,” pointed out Monkberry, from his lying down position. “That’s the one where the light shines down in front of the prison cells. If Quirkhardt has brought her back, that’s where she’ll be.” The four of them crawled towards the large shaft and peered carefully over the top and down into the shaft, or crater. It was quite wide, being the central area around which Pigfrog Command was built, and was a little like the hole 128