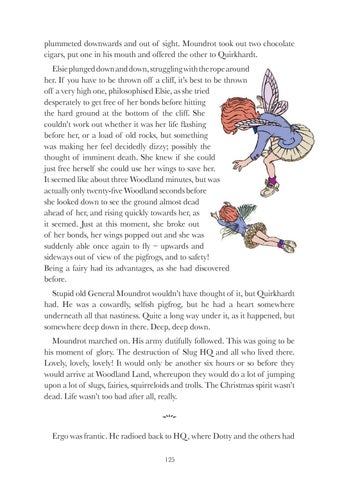 plummeted downwards and out of sight. Moundrot took out two chocolate cigars, put one in his mouth and offered the other to Quirkhardt. Elsie plunged down and down, struggling with the rope around her. If you have to be thrown off a cliff, it’s best to be thrown off a very high one, philosophised Elsie, as she tried desperately to get free of her bonds before hitting the hard ground at the bottom of the cliff. She couldn’t work out whether it was her life flashing before her, or a load of old rocks, but something was making her feel decidedly dizzy; possibly the thought of imminent death. She knew if she could just free herself she could use her wings to save her. It seemed like about three Woodland minutes, but was actually only twenty-five Woodland seconds before she looked down to see the ground almost dead ahead of her, and rising quickly towards her, as it seemed. Just at this moment, she broke out of her bonds, her wings popped out and she was suddenly able once again to fly – upwards and sideways out of view of the pigfrogs, and to safety! Being a fairy had its advantages, as she had discovered before. Stupid old General Moundrot wouldn’t have thought of it, but Quirkhardt had. He was a cowardly, selfish pigfrog, but he had a heart somewhere underneath all that nastiness. Quite a long way under it, as it happened, but somewhere deep down in there. Deep, deep down. Moundrot marched on. His army dutifully followed. This was going to be his moment of glory. The destruction of Slug HQ and all who lived there. Lovely, lovely, lovely! It would only be another six hours or so before they would arrive at Woodland Land, whereupon they would do a lot of jumping upon a lot of slugs, fairies, squirreloids and trolls. The Christmas spirit wasn’t dead. Life wasn’t too bad after all, really. 5 Ergo was frantic. He radioed back to HQ , where Dotty and the others had 125