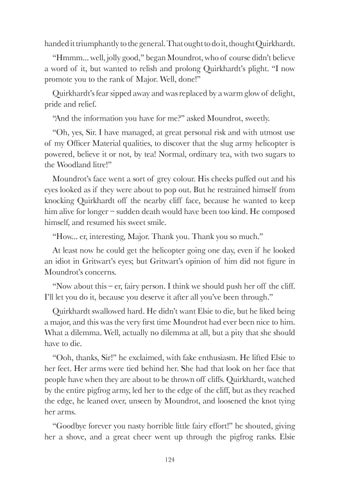 handed it triumphantly to the general. That ought to do it, thought Quirkhardt. “Hmmm... well, jolly good,” began Moundrot, who of course didn’t believe a word of it, but wanted to relish and prolong Quirkhardt’s plight. “I now promote you to the rank of Major. Well, done!” Quirkhardt’s fear sipped away and was replaced by a warm glow of delight, pride and relief. “And the information you have for me?” asked Moundrot, sweetly. “Oh, yes, Sir. I have managed, at great personal risk and with utmost use of my Officer Material qualities, to discover that the slug army helicopter is powered, believe it or not, by tea! Normal, ordinary tea, with two sugars to the Woodland litre!” Moundrot’s face went a sort of grey colour. His cheeks puffed out and his eyes looked as if they were about to pop out. But he restrained himself from knocking Quirkhardt off the nearby cliff face, because he wanted to keep him alive for longer – sudden death would have been too kind. He composed himself, and resumed his sweet smile. “How... er, interesting, Major. Thank you. Thank you so much.” At least now he could get the helicopter going one day, even if he looked an idiot in Gritwart’s eyes; but Gritwart’s opinion of him did not figure in Moundrot’s concerns. “Now about this – er, fairy person. I think we should push her off the cliff. I’ll let you do it, because you deserve it after all you’ve been through.” Quirkhardt swallowed hard. He didn’t want Elsie to die, but he liked being a major, and this was the very first time Moundrot had ever been nice to him. What a dilemma. Well, actually no dilemma at all, but a pity that she should have to die. “Ooh, thanks, Sir!” he exclaimed, with fake enthusiasm. He lifted Elsie to her feet. Her arms were tied behind her. She had that look on her face that people have when they are about to be thrown off cliffs. Quirkhardt, watched by the entire pigfrog army, led her to the edge of the cliff, but as they reached the edge, he leaned over, unseen by Moundrot, and loosened the knot tying her arms. “Goodbye forever you nasty horrible little fairy effort!” he shouted, giving her a shove, and a great cheer went up through the pigfrog ranks. Elsie 124