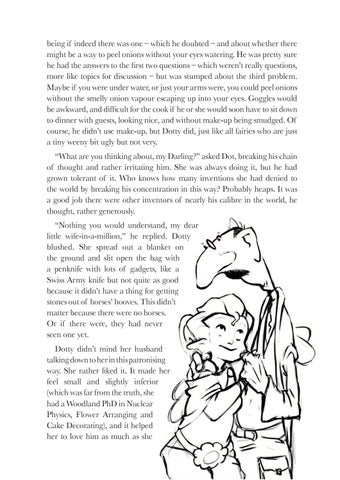 being if indeed there was one – which he doubted – and about whether there might be a way to peel onions without your eyes watering. He was pretty sure he had the answers to the first two questions – which weren’t really questions, more like topics for discussion – but was stumped about the third problem. Maybe if you were under water, or just your arms were, you could peel onions without the smelly onion vapour escaping up into your eyes. Goggles would be awkward, and difficult for the cook if he or she would soon have to sit down to dinner with guests, looking nice, and without make-up being smudged. Of course, he didn’t use make-up, but Dotty did, just like all fairies who are just a tiny weeny bit ugly but not very. “What are you thinking about, my Darling?” asked Dot, breaking his chain of thought and rather irritating him. She was always doing it, but he had grown tolerant of it. Who knows how many inventions she had denied to the world by breaking his concentration in this way? Probably heaps. It was a good job there were other inventors of nearly his calibre in the world, he thought, rather generously. “Nothing you would understand, my dear little wife-in-a-million,” he replied. Dotty blushed. She spread out a blanket on the ground and slit open the bag with a penknife with lots of gadgets, like a Swiss Army knife but not quite as good because it didn’t have a thing for getting stones out of horses’ hooves. This didn’t matter because there were no horses. Or if there were, they had never seen one yet. Dotty didn’t mind her husband talking down to her in this patronising way. She rather liked it. It made her feel small and slightly inferior (which was far from the truth, she had a Woodland PhD in Nuclear Physics, Flower Arranging and Cake Decorating), and it helped her to love him as much as she 7