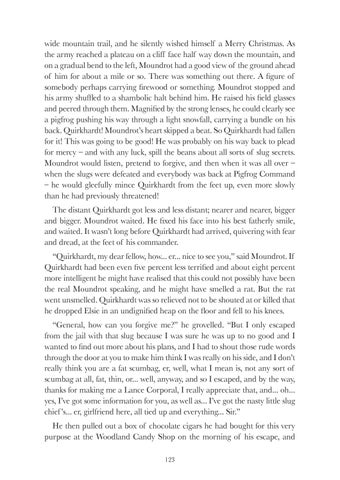 wide mountain trail, and he silently wished himself a Merry Christmas. As the army reached a plateau on a cliff face half way down the mountain, and on a gradual bend to the left, Moundrot had a good view of the ground ahead of him for about a mile or so. There was something out there. A figure of somebody perhaps carrying firewood or something. Moundrot stopped and his army shuffled to a shambolic halt behind him. He raised his field glasses and peered through them. Magnified by the strong lenses, he could clearly see a pigfrog pushing his way through a light snowfall, carrying a bundle on his back. Quirkhardt! Moundrot’s heart skipped a beat. So Quirkhardt had fallen for it! This was going to be good! He was probably on his way back to plead for mercy – and with any luck, spill the beans about all sorts of slug secrets. Moundrot would listen, pretend to forgive, and then when it was all over – when the slugs were defeated and everybody was back at Pigfrog Command – he would gleefully mince Quirkhardt from the feet up, even more slowly than he had previously threatened! The distant Quirkhardt got less and less distant; nearer and nearer, bigger and bigger. Moundrot waited. He fixed his face into his best fatherly smile, and waited. It wasn’t long before Quirkhardt had arrived, quivering with fear and dread, at the feet of his commander. “Quirkhardt, my dear fellow, how... er... nice to see you,” said Moundrot. If Quirkhardt had been even five percent less terrified and about eight percent more intelligent he might have realised that this could not possibly have been the real Moundrot speaking, and he might have smelled a rat. But the rat went unsmelled. Quirkhardt was so relieved not to be shouted at or killed that he dropped Elsie in an undignified heap on the floor and fell to his knees. “General, how can you forgive me?” he grovelled. “But I only escaped from the jail with that slug because I was sure he was up to no good and I wanted to find out more about his plans, and I had to shout those rude words through the door at you to make him think I was really on his side, and I don’t really think you are a fat scumbag, er, well, what I mean is, not any sort of scumbag at all, fat, thin, or... well, anyway, and so I escaped, and by the way, thanks for making me a Lance Corporal, I really appreciate that, and... oh... yes, I’ve got some information for you, as well as... I’ve got the nasty little slug chief ’s... er, girlfriend here, all tied up and everything... Sir.” He then pulled out a box of chocolate cigars he had bought for this very purpose at the Woodland Candy Shop on the morning of his escape, and 123