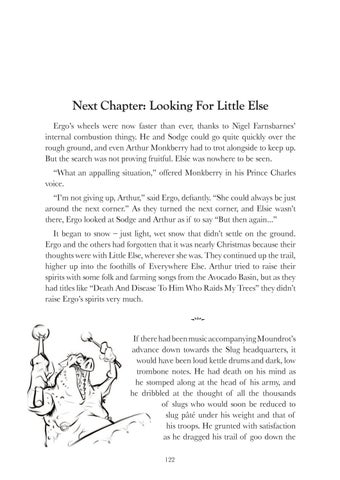 Next Chapter: Looking For Little Else Ergo’s wheels were now faster than ever, thanks to Nigel Farnsbarnes’ internal combustion thingy. He and Sodge could go quite quickly over the rough ground, and even Arthur Monkberry had to trot alongside to keep up. But the search was not proving fruitful. Elsie was nowhere to be seen. “What an appalling situation,” offered Monkberry in his Prince Charles voice. “I’m not giving up, Arthur,” said Ergo, defiantly. “She could always be just around the next corner.” As they turned the next corner, and Elsie wasn’t there, Ergo looked at Sodge and Arthur as if to say “But then again...” It began to snow – just light, wet snow that didn’t settle on the ground. Ergo and the others had forgotten that it was nearly Christmas because their thoughts were with Little Else, wherever she was. They continued up the trail, higher up into the foothills of Everywhere Else. Arthur tried to raise their spirits with some folk and farming songs from the Avocado Basin, but as they had titles like “Death And Disease To Him Who Raids My Trees” they didn’t raise Ergo’s spirits very much. 5 If there had been music accompanying Moundrot’s advance down towards the Slug headquarters, it would have been loud kettle drums and dark, low trombone notes. He had death on his mind as he stomped along at the head of his army, and he dribbled at the thought of all the thousands of slugs who would soon be reduced to slug pâté under his weight and that of his troops. He grunted with satisfaction as he dragged his trail of goo down the 122