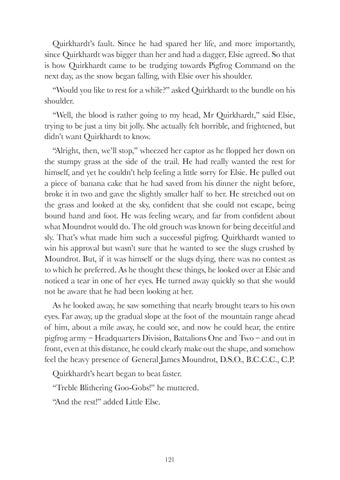 Quirkhardt’s fault. Since he had spared her life, and more importantly, since Quirkhardt was bigger than her and had a dagger, Elsie agreed. So that is how Quirkhardt came to be trudging towards Pigfrog Command on the next day, as the snow began falling, with Elsie over his shoulder. “Would you like to rest for a while?” asked Quirkhardt to the bundle on his shoulder. “Well, the blood is rather going to my head, Mr Quirkhardt,” said Elsie, trying to be just a tiny bit jolly. She actually felt horrible, and frightened, but didn’t want Quirkhardt to know. “Alright, then, we’ll stop,” wheezed her captor as he flopped her down on the stumpy grass at the side of the trail. He had really wanted the rest for himself, and yet he couldn’t help feeling a little sorry for Elsie. He pulled out a piece of banana cake that he had saved from his dinner the night before, broke it in two and gave the slightly smaller half to her. He stretched out on the grass and looked at the sky, confident that she could not escape, being bound hand and foot. He was feeling weary, and far from confident about what Moundrot would do. The old grouch was known for being deceitful and sly. That’s what made him such a successful pigfrog. Quirkhardt wanted to win his approval but wasn’t sure that he wanted to see the slugs crushed by Moundrot. But, if it was himself or the slugs dying, there was no contest as to which he preferred. As he thought these things, he looked over at Elsie and noticed a tear in one of her eyes. He turned away quickly so that she would not be aware that he had been looking at her. As he looked away, he saw something that nearly brought tears to his own eyes. Far away, up the gradual slope at the foot of the mountain range ahead of him, about a mile away, he could see, and now he could hear, the entire pigfrog army – Headquarters Division, Battalions One and Two – and out in front, even at this distance, he could clearly make out the shape, and somehow feel the heavy presence of General James Moundrot, D.S.O., B.C.C.C., C.P. Quirkhardt’s heart began to beat faster. “Treble Blithering Goo-Gobs!” he muttered. “And the rest!” added Little Else.