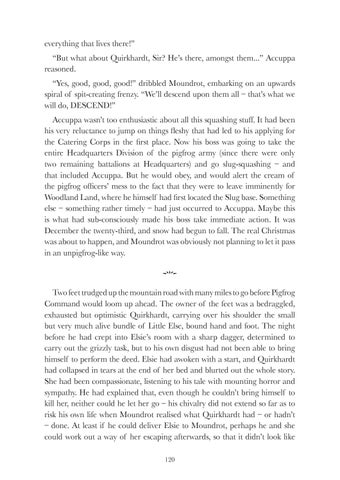 everything that lives there!” “But what about Quirkhardt, Sir? He’s there, amongst them...” Accuppa reasoned. “Yes, good, good, good!” dribbled Moundrot, embarking on an upwards spiral of spit-creating frenzy. “We’ll descend upon them all – that’s what we will do, DESCEND!” Accuppa wasn’t too enthusiastic about all this squashing stuff. It had been his very reluctance to jump on things fleshy that had led to his applying for the Catering Corps in the first place. Now his boss was going to take the entire Headquarters Division of the pigfrog army (since there were only two remaining battalions at Headquarters) and go slug-squashing – and that included Accuppa. But he would obey, and would alert the cream of the pigfrog officers’ mess to the fact that they were to leave imminently for Woodland Land, where he himself had first located the Slug base. Something else – something rather timely – had just occurred to Accuppa. Maybe this is what had sub-consciously made his boss take immediate action. It was December the twenty-third, and snow had begun to fall. The real Christmas was about to happen, and Moundrot was obviously not planning to let it pass in an unpigfrog-like way. 5 Two feet trudged up the mountain road with many miles to go before Pigfrog Command would loom up ahead. The owner of the feet was a bedraggled, exhausted but optimistic Quirkhardt, carrying over his shoulder the small but very much alive bundle of Little Else, bound hand and foot. The night before he had crept into Elsie’s room with a sharp dagger, determined to carry out the grizzly task, but to his own disgust had not been able to bring himself to perform the deed. Elsie had awoken with a start, and Quirkhardt had collapsed in tears at the end of her bed and blurted out the whole story. She had been compassionate, listening to his tale with mounting horror and sympathy. He had explained that, even though he couldn’t bring himself to kill her, neither could he let her go – his chivalry did not extend so far as to risk his own life when Moundrot realised what Quirkhardt had – or hadn’t – done. At least if he could deliver Elsie to Moundrot, perhaps he and she could work out a way of her escaping afterwards, so that it didn’t look like 120