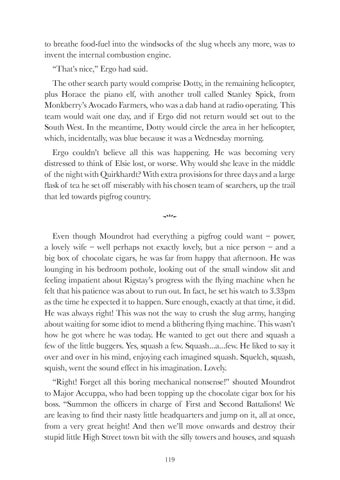 to breathe food-fuel into the windsocks of the slug wheels any more, was to invent the internal combustion engine. “That’s nice,” Ergo had said. The other search party would comprise Dotty, in the remaining helicopter, plus Horace the piano elf, with another troll called Stanley Spick, from Monkberry’s Avocado Farmers, who was a dab hand at radio operating. This team would wait one day, and if Ergo did not return would set out to the South West. In the meantime, Dotty would circle the area in her helicopter, which, incidentally, was blue because it was a Wednesday morning. Ergo couldn’t believe all this was happening. He was becoming very distressed to think of Elsie lost, or worse. Why would she leave in the middle of the night with Quirkhardt? With extra provisions for three days and a large flask of tea he set off miserably with his chosen team of searchers, up the trail that led towards pigfrog country. 5 Even though Moundrot had everything a pigfrog could want – power, a lovely wife – well perhaps not exactly lovely, but a nice person – and a big box of chocolate cigars, he was far from happy that afternoon. He was lounging in his bedroom pothole, looking out of the small window slit and feeling impatient about Rigstay’s progress with the flying machine when he felt that his patience was about to run out. In fact, he set his watch to 3.33pm as the time he expected it to happen. Sure enough, exactly at that time, it did. He was always right! This was not the way to crush the slug army, hanging about waiting for some idiot to mend a blithering flying machine. This wasn’t how he got where he was today. He wanted to get out there and squash a few of the little buggers. Yes, squash a few. Squash...a...few. He liked to say it over and over in his mind, enjoying each imagined squash. Squelch, squash, squish, went the sound effect in his imagination. Lovely. “Right! Forget all this boring mechanical nonsense!” shouted Moundrot to Major Accuppa, who had been topping up the chocolate cigar box for his boss. “Summon the officers in charge of First and Second Battalions! We are leaving to find their nasty little headquarters and jump on it, all at once, from a very great height! And then we’ll move onwards and destroy their stupid little High Street town bit with the silly towers and houses, and squash 119