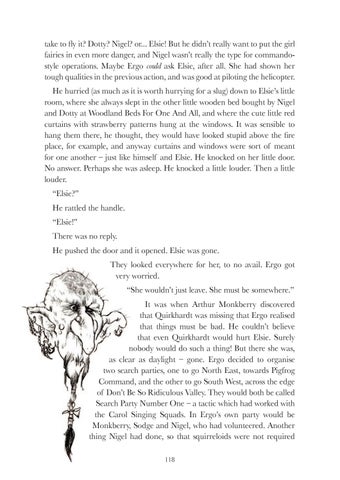 take to fly it? Dotty? Nigel? or... Elsie! But he didn’t really want to put the girl fairies in even more danger, and Nigel wasn’t really the type for commandostyle operations. Maybe Ergo could ask Elsie, after all. She had shown her tough qualities in the previous action, and was good at piloting the helicopter. He hurried (as much as it is worth hurrying for a slug) down to Elsie’s little room, where she always slept in the other little wooden bed bought by Nigel and Dotty at Woodland Beds For One And All, and where the cute little red curtains with strawberry patterns hung at the windows. It was sensible to hang them there, he thought, they would have looked stupid above the fire place, for example, and anyway curtains and windows were sort of meant for one another – just like himself and Elsie. He knocked on her little door. No answer. Perhaps she was asleep. He knocked a little louder. Then a little louder. “Elsie?” He rattled the handle. “Elsie!” There was no reply. He pushed the door and it opened. Elsie was gone. They looked everywhere for her, to no avail. Ergo got very worried. “She wouldn’t just leave. She must be somewhere.” It was when Arthur Monkberry discovered that Quirkhardt was missing that Ergo realised that things must be bad. He couldn’t believe that even Quirkhardt would hurt Elsie. Surely nobody would do such a thing! But there she was, as clear as daylight – gone. Ergo decided to organise two search parties, one to go North East, towards Pigfrog Command, and the other to go South West, across the edge of Don’t Be So Ridiculous Valley. They would both be called Search Party Number One – a tactic which had worked with the Carol Singing Squads. In Ergo’s own party would be Monkberry, Sodge and Nigel, who had volunteered. Another thing Nigel had done, so that squirreloids were not required 118