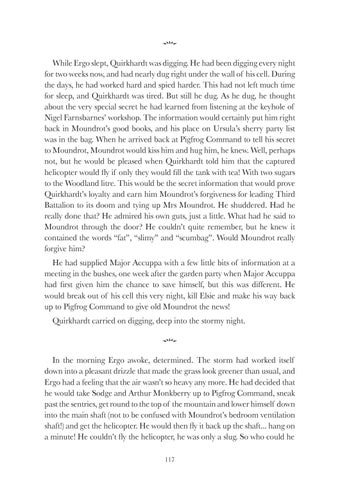 5 While Ergo slept, Quirkhardt was digging. He had been digging every night for two weeks now, and had nearly dug right under the wall of his cell. During the days, he had worked hard and spied harder. This had not left much time for sleep, and Quirkhardt was tired. But still he dug. As he dug, he thought about the very special secret he had learned from listening at the keyhole of Nigel Farnsbarnes’ workshop. The information would certainly put him right back in Moundrot’s good books, and his place on Ursula’s sherry party list was in the bag. When he arrived back at Pigfrog Command to tell his secret to Moundrot, Moundrot would kiss him and hug him, he knew. Well, perhaps not, but he would be pleased when Quirkhardt told him that the captured helicopter would fly if only they would fill the tank with tea! With two sugars to the Woodland litre. This would be the secret information that would prove Quirkhardt’s loyalty and earn him Moundrot’s forgiveness for leading Third Battalion to its doom and tying up Mrs Moundrot. He shuddered. Had he really done that? He admired his own guts, just a little. What had he said to Moundrot through the door? He couldn’t quite remember, but he knew it contained the words “fat”, “slimy” and “scumbag”. Would Moundrot really forgive him? He had supplied Major Accuppa with a few little bits of information at a meeting in the bushes, one week after the garden party when Major Accuppa had first given him the chance to save himself, but this was different. He would break out of his cell this very night, kill Elsie and make his way back up to Pigfrog Command to give old Moundrot the news! Quirkhardt carried on digging, deep into the stormy night. 5 In the morning Ergo awoke, determined. The storm had worked itself down into a pleasant drizzle that made the grass look greener than usual, and Ergo had a feeling that the air wasn’t so heavy any more. He had decided that he would take Sodge and Arthur Monkberry up to Pigfrog Command, sneak past the sentries, get round to the top of the mountain and lower himself down into the main shaft (not to be confused with Moundrot’s bedroom ventilation shaft!) and get the helicopter. He would then fly it back up the shaft... hang on a minute! He couldn’t fly the helicopter, he was only a slug. So who could he 117