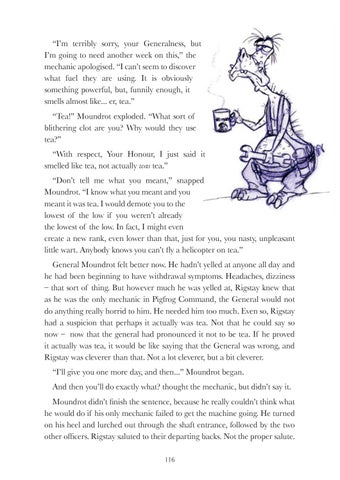 “I’m terribly sorry, your Generalness, but I’m going to need another week on this,” the mechanic apologised. “I can’t seem to discover what fuel they are using. It is obviously something powerful, but, funnily enough, it smells almost like... er, tea.” “Tea!” Moundrot exploded. “What sort of blithering clot are you? Why would they use tea?” “With respect, Your Honour, I just said it smelled like tea, not actually was tea.” “Don’t tell me what you meant,” snapped Moundrot. “I know what you meant and you meant it was tea. I would demote you to the lowest of the low if you weren’t already the lowest of the low. In fact, I might even create a new rank, even lower than that, just for you, you nasty, unpleasant little wart. Anybody knows you can’t fly a helicopter on tea.” General Moundrot felt better now. He hadn’t yelled at anyone all day and he had been beginning to have withdrawal symptoms. Headaches, dizziness – that sort of thing. But however much he was yelled at, Rigstay knew that as he was the only mechanic in Pigfrog Command, the General would not do anything really horrid to him. He needed him too much. Even so, Rigstay had a suspicion that perhaps it actually was tea. Not that he could say so now – now that the general had pronounced it not to be tea. If he proved it actually was tea, it would be like saying that the General was wrong, and Rigstay was cleverer than that. Not a lot cleverer, but a bit cleverer. “I’ll give you one more day, and then...” Moundrot began. And then you’ll do exactly what? thought the mechanic, but didn’t say it. Moundrot didn’t finish the sentence, because he really couldn’t think what he would do if his only mechanic failed to get the machine going. He turned on his heel and lurched out through the shaft entrance, followed by the two other officers. Rigstay saluted to their departing backs. Not the proper salute. 116