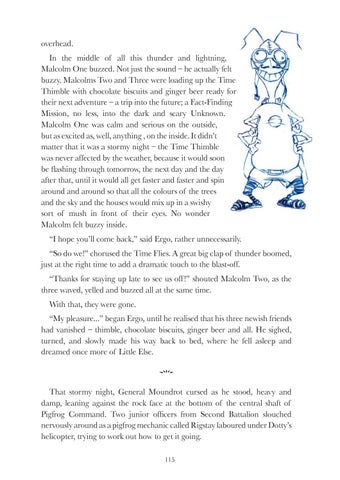 overhead. In the middle of all this thunder and lightning, Malcolm One buzzed. Not just the sound – he actually felt buzzy. Malcolms Two and Three were loading up the Time Thimble with chocolate biscuits and ginger beer ready for their next adventure – a trip into the future; a Fact-Finding Mission, no less, into the dark and scary Unknown. Malcolm One was calm and serious on the outside, but as excited as, well, anything , on the inside. It didn’t matter that it was a stormy night – the Time Thimble was never affected by the weather, because it would soon be flashing through tomorrow, the next day and the day after that, until it would all get faster and faster and spin around and around so that all the colours of the trees and the sky and the houses would mix up in a swishy sort of mush in front of their eyes. No wonder Malcolm felt buzzy inside. “I hope you’ll come back,” said Ergo, rather unnecessarily. “So do we!” chorused the Time Flies. A great big clap of thunder boomed, just at the right time to add a dramatic touch to the blast-off. “Thanks for staying up late to see us off !” shouted Malcolm Two, as the three waved, yelled and buzzed all at the same time. With that, they were gone. “My pleasure...” began Ergo, until he realised that his three newish friends had vanished – thimble, chocolate biscuits, ginger beer and all. He sighed, turned, and slowly made his way back to bed, where he fell asleep and dreamed once more of Little Else. 5 That stormy night, General Moundrot cursed as he stood, heavy and damp, leaning against the rock face at the bottom of the central shaft of Pigfrog Command. Two junior officers from Second Battalion slouched nervously around as a pigfrog mechanic called Rigstay laboured under Dotty’s helicopter, trying to work out how to get it going. 115