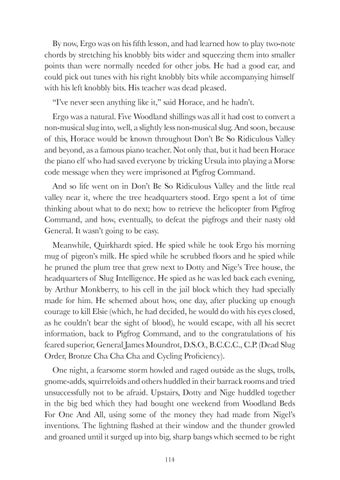 By now, Ergo was on his fifth lesson, and had learned how to play two-note chords by stretching his knobbly bits wider and squeezing them into smaller points than were normally needed for other jobs. He had a good ear, and could pick out tunes with his right knobbly bits while accompanying himself with his left knobbly bits. His teacher was dead pleased. “I’ve never seen anything like it,” said Horace, and he hadn’t. Ergo was a natural. Five Woodland shillings was all it had cost to convert a non-musical slug into, well, a slightly less non-musical slug. And soon, because of this, Horace would be known throughout Don’t Be So Ridiculous Valley and beyond, as a famous piano teacher. Not only that, but it had been Horace the piano elf who had saved everyone by tricking Ursula into playing a Morse code message when they were imprisoned at Pigfrog Command. And so life went on in Don’t Be So Ridiculous Valley and the little real valley near it, where the tree headquarters stood. Ergo spent a lot of time thinking about what to do next; how to retrieve the helicopter from Pigfrog Command, and how, eventually, to defeat the pigfrogs and their nasty old General. It wasn’t going to be easy. Meanwhile, Quirkhardt spied. He spied while he took Ergo his morning mug of pigeon’s milk. He spied while he scrubbed floors and he spied while he pruned the plum tree that grew next to Dotty and Nige’s Tree house, the headquarters of Slug Intelligence. He spied as he was led back each evening, by Arthur Monkberry, to his cell in the jail block which they had specially made for him. He schemed about how, one day, after plucking up enough courage to kill Elsie (which, he had decided, he would do with his eyes closed, as he couldn’t bear the sight of blood), he would escape, with all his secret information, back to Pigfrog Command, and to the congratulations of his feared superior, General James Moundrot, D.S.O., B.C.C.C., C.P. (Dead Slug Order, Bronze Cha Cha Cha and Cycling Proficiency). One night, a fearsome storm howled and raged outside as the slugs, trolls, gnome-adds, squirreloids and others huddled in their barrack rooms and tried unsuccessfully not to be afraid. Upstairs, Dotty and Nige huddled together in the big bed which they had bought one weekend from Woodland Beds For One And All, using some of the money they had made from Nigel’s inventions. The lightning flashed at their window and the thunder growled and groaned until it surged up into big, sharp bangs which seemed to be right 114