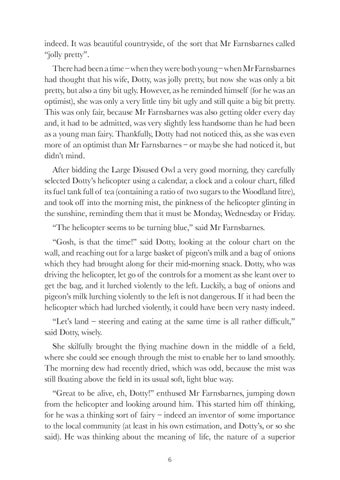 indeed. It was beautiful countryside, of the sort that Mr Farnsbarnes called “jolly pretty”. There had been a time – when they were both young – when Mr Farnsbarnes had thought that his wife, Dotty, was jolly pretty, but now she was only a bit pretty, but also a tiny bit ugly. However, as he reminded himself (for he was an optimist), she was only a very little tiny bit ugly and still quite a big bit pretty. This was only fair, because Mr Farnsbarnes was also getting older every day and, it had to be admitted, was very slightly less handsome than he had been as a young man fairy. Thankfully, Dotty had not noticed this, as she was even more of an optimist than Mr Farnsbarnes – or maybe she had noticed it, but didn’t mind. After bidding the Large Disused Owl a very good morning, they carefully selected Dotty’s helicopter using a calendar, a clock and a colour chart, filled its fuel tank full of tea (containing a ratio of two sugars to the Woodland litre), and took off into the morning mist, the pinkness of the helicopter glinting in the sunshine, reminding them that it must be Monday, Wednesday or Friday. “The helicopter seems to be turning blue,” said Mr Farnsbarnes. “Gosh, is that the time!” said Dotty, looking at the colour chart on the wall, and reaching out for a large basket of pigeon’s milk and a bag of onions which they had brought along for their mid-morning snack. Dotty, who was driving the helicopter, let go of the controls for a moment as she leant over to get the bag, and it lurched violently to the left. Luckily, a bag of onions and pigeon’s milk lurching violently to the left is not dangerous. If it had been the helicopter which had lurched violently, it could have been very nasty indeed. “Let’s land – steering and eating at the same time is all rather difficult,” said Dotty, wisely. She skilfully brought the flying machine down in the middle of a field, where she could see enough through the mist to enable her to land smoothly. The morning dew had recently dried, which was odd, because the mist was still floating above the field in its usual soft, light blue way. “Great to be alive, eh, Dotty!” enthused Mr Farnsbarnes, jumping down from the helicopter and looking around him. This started him off thinking, for he was a thinking sort of fairy – indeed an inventor of some importance to the local community (at least in his own estimation, and Dotty’s, or so she said). He was thinking about the meaning of life, the nature of a superior 6