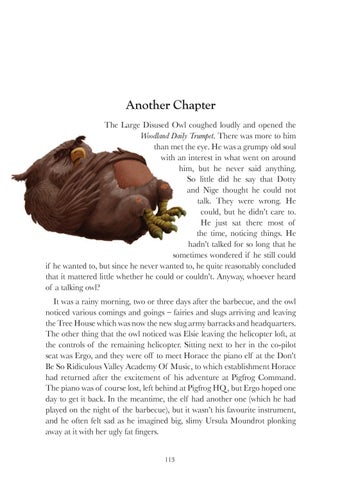 Another Chapter The Large Disused Owl coughed loudly and opened the Woodland Daily Trumpet. There was more to him than met the eye. He was a grumpy old soul with an interest in what went on around him, but he never said anything. So little did he say that Dotty and Nige thought he could not talk. They were wrong. He could, but he didn’t care to. He just sat there most of the time, noticing things. He hadn’t talked for so long that he sometimes wondered if he still could if he wanted to, but since he never wanted to, he quite reasonably concluded that it mattered little whether he could or couldn’t. Anyway, whoever heard of a talking owl? It was a rainy morning, two or three days after the barbecue, and the owl noticed various comings and goings – fairies and slugs arriving and leaving the Tree House which was now the new slug army barracks and headquarters. The other thing that the owl noticed was Elsie leaving the helicopter loft, at the controls of the remaining helicopter. Sitting next to her in the co-pilot seat was Ergo, and they were off to meet Horace the piano elf at the Don’t Be So Ridiculous Valley Academy Of Music, to which establishment Horace had returned after the excitement of his adventure at Pigfrog Command. The piano was of course lost, left behind at Pigfrog HQ , but Ergo hoped one day to get it back. In the meantime, the elf had another one (which he had played on the night of the barbecue), but it wasn’t his favourite instrument, and he often felt sad as he imagined big, slimy Ursula Moundrot plonking away at it with her ugly fat fingers. 113