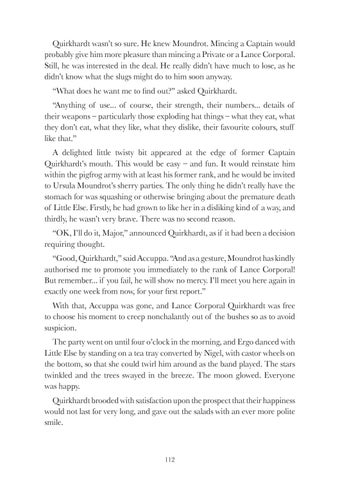 Quirkhardt wasn’t so sure. He knew Moundrot. Mincing a Captain would probably give him more pleasure than mincing a Private or a Lance Corporal. Still, he was interested in the deal. He really didn’t have much to lose, as he didn’t know what the slugs might do to him soon anyway. “What does he want me to find out?” asked Quirkhardt. “Anything of use... of course, their strength, their numbers... details of their weapons – particularly those exploding hat things – what they eat, what they don’t eat, what they like, what they dislike, their favourite colours, stuff like that.” A delighted little twisty bit appeared at the edge of former Captain Quirkhardt’s mouth. This would be easy – and fun. It would reinstate him within the pigfrog army with at least his former rank, and he would be invited to Ursula Moundrot’s sherry parties. The only thing he didn’t really have the stomach for was squashing or otherwise bringing about the premature death of Little Else. Firstly, he had grown to like her in a disliking kind of a way, and thirdly, he wasn’t very brave. There was no second reason. “OK, I’ll do it, Major,” announced Quirkhardt, as if it had been a decision requiring thought. “Good, Quirkhardt,” said Accuppa. “And as a gesture, Moundrot has kindly authorised me to promote you immediately to the rank of Lance Corporal! But remember... if you fail, he will show no mercy. I’ll meet you here again in exactly one week from now, for your first report.” With that, Accuppa was gone, and Lance Corporal Quirkhardt was free to choose his moment to creep nonchalantly out of the bushes so as to avoid suspicion. The party went on until four o’clock in the morning, and Ergo danced with Little Else by standing on a tea tray converted by Nigel, with castor wheels on the bottom, so that she could twirl him around as the band played. The stars twinkled and the trees swayed in the breeze. The moon glowed. Everyone was happy. Quirkhardt brooded with satisfaction upon the prospect that their happiness would not last for very long, and gave out the salads with an ever more polite smile.