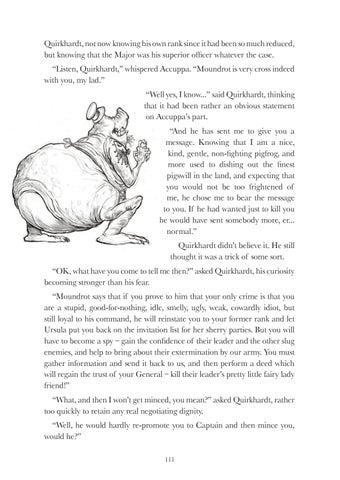 Quirkhardt, not now knowing his own rank since it had been so much reduced, but knowing that the Major was his superior officer whatever the case. “Listen, Quirkhardt,” whispered Accuppa. “Moundrot is very cross indeed with you, my lad.” “Well yes, I know...” said Quirkhardt, thinking that it had been rather an obvious statement on Accuppa’s part. “And he has sent me to give you a message. Knowing that I am a nice, kind, gentle, non-fighting pigfrog, and more used to dishing out the finest pigswill in the land, and expecting that you would not be too frightened of me, he chose me to bear the message to you. If he had wanted just to kill you he would have sent somebody more, er... normal.” Quirkhardt didn’t believe it. He still thought it was a trick of some sort. “OK, what have you come to tell me then?” asked Quirkhardt, his curiosity becoming stronger than his fear. “Moundrot says that if you prove to him that your only crime is that you are a stupid, good-for-nothing, idle, smelly, ugly, weak, cowardly idiot, but still loyal to his command, he will reinstate you to your former rank and let Ursula put you back on the invitation list for her sherry parties. But you will have to become a spy – gain the confidence of their leader and the other slug enemies, and help to bring about their extermination by our army. You must gather information and send it back to us, and then perform a deed which will regain the trust of your General – kill their leader’s pretty little fairy lady friend!” “What, and then I won’t get minced, you mean?” asked Quirkhardt, rather too quickly to retain any real negotiating dignity. “Well, he would hardly re-promote you to Captain and then mince you, would he?” 111