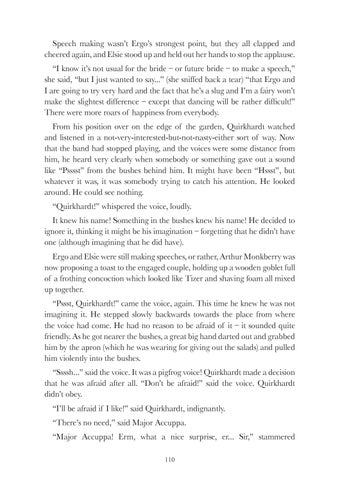 Speech making wasn’t Ergo’s strongest point, but they all clapped and cheered again, and Elsie stood up and held out her hands to stop the applause. “I know it’s not usual for the bride – or future bride – to make a speech,” she said, “but I just wanted to say...” (she sniffed back a tear) “that Ergo and I are going to try very hard and the fact that he’s a slug and I’m a fairy won’t make the slightest difference – except that dancing will be rather difficult!” There were more roars of happiness from everybody. From his position over on the edge of the garden, Quirkhardt watched and listened in a not-very-interested-but-not-nasty-either sort of way. Now that the band had stopped playing, and the voices were some distance from him, he heard very clearly when somebody or something gave out a sound like “Psssst” from the bushes behind him. It might have been “Hssst”, but whatever it was, it was somebody trying to catch his attention. He looked around. He could see nothing. “Quirkhardt!” whispered the voice, loudly. It knew his name! Something in the bushes knew his name! He decided to ignore it, thinking it might be his imagination – forgetting that he didn’t have one (although imagining that he did have). Ergo and Elsie were still making speeches, or rather, Arthur Monkberry was now proposing a toast to the engaged couple, holding up a wooden goblet full of a frothing concoction which looked like Tizer and shaving foam all mixed up together. “Pssst, Quirkhardt!” came the voice, again. This time he knew he was not imagining it. He stepped slowly backwards towards the place from where the voice had come. He had no reason to be afraid of it – it sounded quite friendly. As he got nearer the bushes, a great big hand darted out and grabbed him by the apron (which he was wearing for giving out the salads) and pulled him violently into the bushes. “Ssssh...” said the voice. It was a pigfrog voice! Quirkhardt made a decision that he was afraid after all. “Don’t be afraid!” said the voice. Quirkhardt didn’t obey. “I’ll be afraid if I like!” said Quirkhardt, indignantly. “There’s no need,” said Major Accuppa. “Major Accuppa! Erm, what a nice surprise, er... Sir,” stammered 110