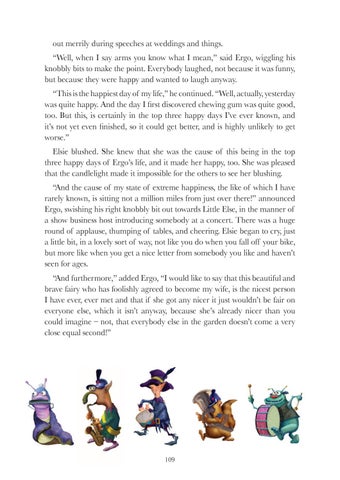 out merrily during speeches at weddings and things. “Well, when I say arms you know what I mean,” said Ergo, wiggling his knobbly bits to make the point. Everybody laughed, not because it was funny, but because they were happy and wanted to laugh anyway. “This is the happiest day of my life,” he continued. “Well, actually, yesterday was quite happy. And the day I first discovered chewing gum was quite good, too. But this, is certainly in the top three happy days I’ve ever known, and it’s not yet even finished, so it could get better, and is highly unlikely to get worse.” Elsie blushed. She knew that she was the cause of this being in the top three happy days of Ergo’s life, and it made her happy, too. She was pleased that the candlelight made it impossible for the others to see her blushing. “And the cause of my state of extreme happiness, the like of which I have rarely known, is sitting not a million miles from just over there!” announced Ergo, swishing his right knobbly bit out towards Little Else, in the manner of a show business host introducing somebody at a concert. There was a huge round of applause, thumping of tables, and cheering. Elsie began to cry, just a little bit, in a lovely sort of way, not like you do when you fall off your bike, but more like when you get a nice letter from somebody you like and haven’t seen for ages. “And furthermore,” added Ergo, “I would like to say that this beautiful and brave fairy who has foolishly agreed to become my wife, is the nicest person I have ever, ever met and that if she got any nicer it just wouldn’t be fair on everyone else, which it isn’t anyway, because she’s already nicer than you could imagine – not, that everybody else in the garden doesn’t come a very close equal second!”