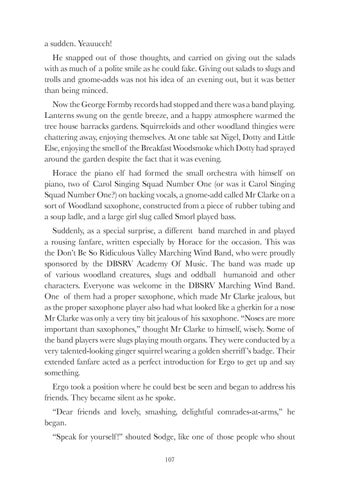 a sudden. Yeauucch! He snapped out of those thoughts, and carried on giving out the salads with as much of a polite smile as he could fake. Giving out salads to slugs and trolls and gnome-adds was not his idea of an evening out, but it was better than being minced. Now the George Formby records had stopped and there was a band playing. Lanterns swung on the gentle breeze, and a happy atmosphere warmed the tree house barracks gardens. Squirreloids and other woodland thingies were chattering away, enjoying themselves. At one table sat Nigel, Dotty and Little Else, enjoying the smell of the Breakfast Woodsmoke which Dotty had sprayed around the garden despite the fact that it was evening. Horace the piano elf had formed the small orchestra with himself on piano, two of Carol Singing Squad Number One (or was it Carol Singing Squad Number One?) on backing vocals, a gnome-add called Mr Clarke on a sort of Woodland saxophone, constructed from a piece of rubber tubing and a soup ladle, and a large girl slug called Smorl played bass. Suddenly, as a special surprise, a different band marched in and played a rousing fanfare, written especially by Horace for the occasion. This was the Don’t Be So Ridiculous Valley Marching Wind Band, who were proudly sponsored by the DBSRV Academy Of Music. The band was made up of various woodland creatures, slugs and oddball humanoid and other characters. Everyone was welcome in the DBSRV Marching Wind Band. One of them had a proper saxophone, which made Mr Clarke jealous, but as the proper saxophone player also had what looked like a gherkin for a nose Mr Clarke was only a very tiny bit jealous of his saxophone. “Noses are more important than saxophones,” thought Mr Clarke to himself, wisely. Some of the band players were slugs playing mouth organs. They were conducted by a very talented-looking ginger squirrel wearing a golden sherriff ’s badge. Their extended fanfare acted as a perfect introduction for Ergo to get up and say something. Ergo took a position where he could best be seen and began to address his friends. They became silent as he spoke. “Dear friends and lovely, smashing, delightful comrades-at-arms,” he began. “Speak for yourself !” shouted Sodge, like one of those people who shout 107