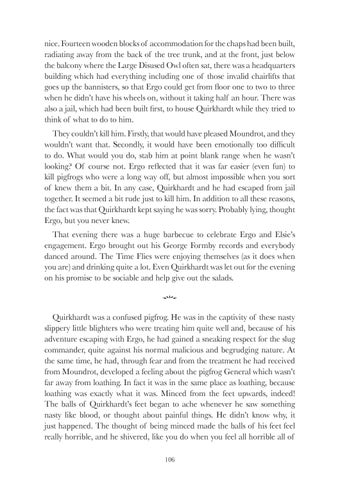 nice. Fourteen wooden blocks of accommodation for the chaps had been built, radiating away from the back of the tree trunk, and at the front, just below the balcony where the Large Disused Owl often sat, there was a headquarters building which had everything including one of those invalid chairlifts that goes up the bannisters, so that Ergo could get from floor one to two to three when he didn’t have his wheels on, without it taking half an hour. There was also a jail, which had been built first, to house Quirkhardt while they tried to think of what to do to him. They couldn’t kill him. Firstly, that would have pleased Moundrot, and they wouldn’t want that. Secondly, it would have been emotionally too difficult to do. What would you do, stab him at point blank range when he wasn’t looking? Of course not. Ergo reflected that it was far easier (even fun) to kill pigfrogs who were a long way off, but almost impossible when you sort of knew them a bit. In any case, Quirkhardt and he had escaped from jail together. It seemed a bit rude just to kill him. In addition to all these reasons, the fact was that Quirkhardt kept saying he was sorry. Probably lying, thought Ergo, but you never knew. That evening there was a huge barbecue to celebrate Ergo and Elsie’s engagement. Ergo brought out his George Formby records and everybody danced around. The Time Flies were enjoying themselves (as it does when you are) and drinking quite a lot. Even Quirkhardt was let out for the evening on his promise to be sociable and help give out the salads. 5 Quirkhardt was a confused pigfrog. He was in the captivity of these nasty slippery little blighters who were treating him quite well and, because of his adventure escaping with Ergo, he had gained a sneaking respect for the slug commander, quite against his normal malicious and begrudging nature. At the same time, he had, through fear and from the treatment he had received from Moundrot, developed a feeling about the pigfrog General which wasn’t far away from loathing. In fact it was in the same place as loathing, because loathing was exactly what it was. Minced from the feet upwards, indeed! The balls of Quirkhardt’s feet began to ache whenever he saw something nasty like blood, or thought about painful things. He didn’t know why, it just happened. The thought of being minced made the balls of his feet feel really horrible, and he shivered, like you do when you feel all horrible all of 106