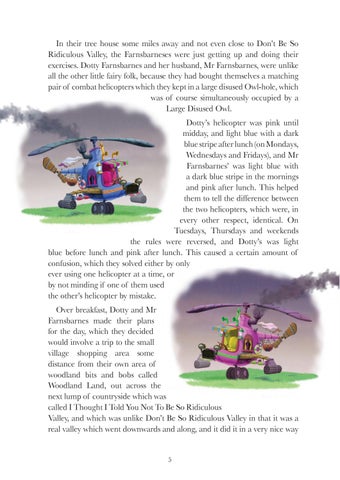 In their tree house some miles away and not even close to Don’t Be So Ridiculous Valley, the Farnsbarneses were just getting up and doing their exercises. Dotty Farnsbarnes and her husband, Mr Farnsbarnes, were unlike all the other little fairy folk, because they had bought themselves a matching pair of combat helicopters which they kept in a large disused Owl-hole, which was of course simultaneously occupied by a Large Disused Owl. Dotty’s helicopter was pink until midday, and light blue with a dark blue stripe after lunch (on Mondays, Wednesdays and Fridays), and Mr Farnsbarnes’ was light blue with a dark blue stripe in the mornings and pink after lunch. This helped them to tell the difference between the two helicopters, which were, in every other respect, identical. On Tuesdays, Thursdays and weekends the rules were reversed, and Dotty’s was light blue before lunch and pink after lunch. This caused a certain amount of confusion, which they solved either by only ever using one helicopter at a time, or by not minding if one of them used the other’s helicopter by mistake. Over breakfast, Dotty and Mr Farnsbarnes made their plans for the day, which they decided would involve a trip to the small village shopping area some distance from their own area of woodland bits and bobs called Woodland Land, out across the next lump of countryside which was called I Thought I Told You Not To Be So Ridiculous Valley, and which was unlike Don’t Be So Ridiculous Valley in that it was a real valley which went downwards and along, and it did it in a very nice way