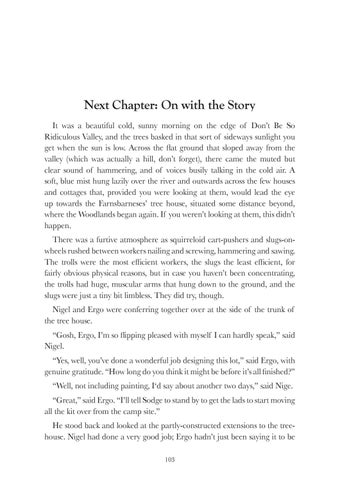 Next Chapter: On with the Story It was a beautiful cold, sunny morning on the edge of Don’t Be So Ridiculous Valley, and the trees basked in that sort of sideways sunlight you get when the sun is low. Across the flat ground that sloped away from the valley (which was actually a hill, don’t forget), there came the muted but clear sound of hammering, and of voices busily talking in the cold air. A soft, blue mist hung lazily over the river and outwards across the few houses and cottages that, provided you were looking at them, would lead the eye up towards the Farnsbarneses’ tree house, situated some distance beyond, where the Woodlands began again. If you weren’t looking at them, this didn’t happen. There was a furtive atmosphere as squirreloid cart-pushers and slugs-onwheels rushed between workers nailing and screwing, hammering and sawing. The trolls were the most efficient workers, the slugs the least efficient, for fairly obvious physical reasons, but in case you haven’t been concentrating, the trolls had huge, muscular arms that hung down to the ground, and the slugs were just a tiny bit limbless. They did try, though. Nigel and Ergo were conferring together over at the side of the trunk of the tree house. “Gosh, Ergo, I’m so flipping pleased with myself I can hardly speak,” said Nigel. “Yes, well, you’ve done a wonderful job designing this lot,” said Ergo, with genuine gratitude. “How long do you think it might be before it’s all finished?” “Well, not including painting, I‘d say about another two days,” said Nige. “Great,” said Ergo. “I’ll tell Sodge to stand by to get the lads to start moving all the kit over from the camp site.” He stood back and looked at the partly-constructed extensions to the treehouse. Nigel had done a very good job; Ergo hadn’t just been saying it to be 103