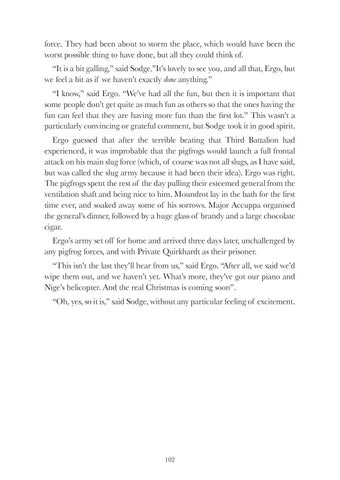 force. They had been about to storm the place, which would have been the worst possible thing to have done, but all they could think of. “It is a bit galling,” said Sodge.”It’s lovely to see you, and all that, Ergo, but we feel a bit as if we haven’t exactly done anything.” “I know,” said Ergo. “We’ve had all the fun, but then it is important that some people don’t get quite as much fun as others so that the ones having the fun can feel that they are having more fun than the first lot.” This wasn’t a particularly convincing or grateful comment, but Sodge took it in good spirit. Ergo guessed that after the terrible beating that Third Battalion had experienced, it was improbable that the pigfrogs would launch a full frontal attack on his main slug force (which, of course was not all slugs, as I have said, but was called the slug army because it had been their idea). Ergo was right. The pigfrogs spent the rest of the day pulling their esteemed general from the ventilation shaft and being nice to him. Moundrot lay in the bath for the first time ever, and soaked away some of his sorrows. Major Accuppa organised the general’s dinner, followed by a huge glass of brandy and a large chocolate cigar. Ergo’s army set off for home and arrived three days later, unchallenged by any pigfrog forces, and with Private Quirkhardt as their prisoner. “This isn’t the last they’ll hear from us,” said Ergo. “After all, we said we’d wipe them out, and we haven’t yet. What’s more, they’ve got our piano and Nige’s helicopter. And the real Christmas is coming soon”. “Oh, yes, so it is,” said Sodge, without any particular feeling of excitement.