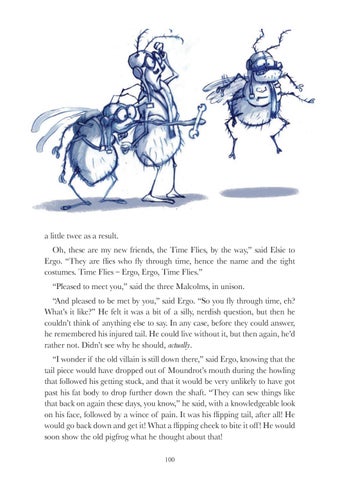 a little twee as a result. Oh, these are my new friends, the Time Flies, by the way,” said Elsie to Ergo. “They are flies who fly through time, hence the name and the tight costumes. Time Flies – Ergo, Ergo, Time Flies.” “Pleased to meet you,” said the three Malcolms, in unison. “And pleased to be met by you,” said Ergo. “So you fly through time, eh? What’s it like?” He felt it was a bit of a silly, nerdish question, but then he couldn’t think of anything else to say. In any case, before they could answer, he remembered his injured tail. He could live without it, but then again, he’d rather not. Didn’t see why he should, actually. “I wonder if the old villain is still down there,” said Ergo, knowing that the tail piece would have dropped out of Moundrot’s mouth during the howling that followed his getting stuck, and that it would be very unlikely to have got past his fat body to drop further down the shaft. “They can sew things like that back on again these days, you know,” he said, with a knowledgeable look on his face, followed by a wince of pain. It was his flipping tail, after all! He would go back down and get it! What a flipping cheek to bite it off ! He would soon show the old pigfrog what he thought about that! 100