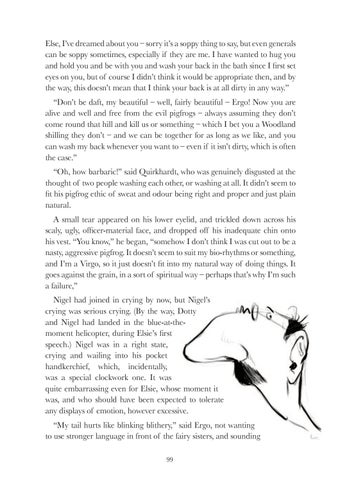 Else, I’ve dreamed about you – sorry it’s a soppy thing to say, but even generals can be soppy sometimes, especially if they are me. I have wanted to hug you and hold you and be with you and wash your back in the bath since I first set eyes on you, but of course I didn’t think it would be appropriate then, and by the way, this doesn’t mean that I think your back is at all dirty in any way.” “Don’t be daft, my beautiful – well, fairly beautiful – Ergo! Now you are alive and well and free from the evil pigfrogs – always assuming they don’t come round that hill and kill us or something – which I bet you a Woodland shilling they don’t – and we can be together for as long as we like, and you can wash my back whenever you want to – even if it isn’t dirty, which is often the case.” “Oh, how barbaric!” said Quirkhardt, who was genuinely disgusted at the thought of two people washing each other, or washing at all. It didn’t seem to fit his pigfrog ethic of sweat and odour being right and proper and just plain natural. A small tear appeared on his lower eyelid, and trickled down across his scaly, ugly, officer-material face, and dropped off his inadequate chin onto his vest. “You know,” he began, “somehow I don’t think I was cut out to be a nasty, aggressive pigfrog. It doesn’t seem to suit my bio-rhythms or something, and I’m a Virgo, so it just doesn’t fit into my natural way of doing things. It goes against the grain, in a sort of spiritual way – perhaps that’s why I’m such a failure,” Nigel had joined in crying by now, but Nigel’s crying was serious crying. (By the way, Dotty and Nigel had landed in the blue-at-themoment helicopter, during Elsie’s first speech.) Nigel was in a right state, crying and wailing into his pocket handkerchief, which, incidentally, was a special clockwork one. It was quite embarrassing even for Elsie, whose moment it was, and who should have been expected to tolerate any displays of emotion, however excessive. “My tail hurts like blinking blithery,” said Ergo, not wanting to use stronger language in front of the fairy sisters, and sounding 99