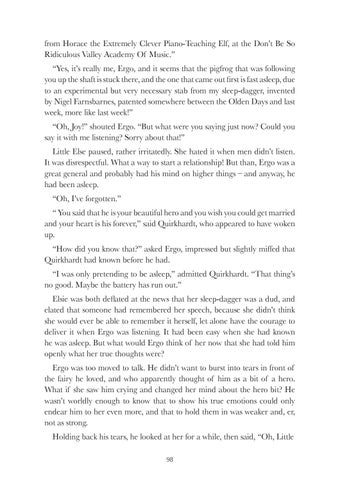 from Horace the Extremely Clever Piano-Teaching Elf, at the Don’t Be So Ridiculous Valley Academy Of Music.” “Yes, it’s really me, Ergo, and it seems that the pigfrog that was following you up the shaft is stuck there, and the one that came out first is fast asleep, due to an experimental but very necessary stab from my sleep-dagger, invented by Nigel Farnsbarnes, patented somewhere between the Olden Days and last week, more like last week!” “Oh, Joy!” shouted Ergo. “But what were you saying just now? Could you say it with me listening? Sorry about that!” Little Else paused, rather irritatedly. She hated it when men didn’t listen. It was disrespectful. What a way to start a relationship! But than, Ergo was a great general and probably had his mind on higher things – and anyway, he had been asleep. “Oh, I’ve forgotten.” “ You said that he is your beautiful hero and you wish you could get married and your heart is his forever,” said Quirkhardt, who appeared to have woken up. “How did you know that?” asked Ergo, impressed but slightly miffed that Quirkhardt had known before he had. “I was only pretending to be asleep,” admitted Quirkhardt. “That thing’s no good. Maybe the battery has run out.” Elsie was both deflated at the news that her sleep-dagger was a dud, and elated that someone had remembered her speech, because she didn’t think she would ever be able to remember it herself, let alone have the courage to deliver it when Ergo was listening. It had been easy when she had known he was asleep. But what would Ergo think of her now that she had told him openly what her true thoughts were? Ergo was too moved to talk. He didn’t want to burst into tears in front of the fairy he loved, and who apparently thought of him as a bit of a hero. What if she saw him crying and changed her mind about the hero bit? He wasn’t worldly enough to know that to show his true emotions could only endear him to her even more, and that to hold them in was weaker and, er, not as strong. Holding back his tears, he looked at her for a while, then said, “Oh, Little 98